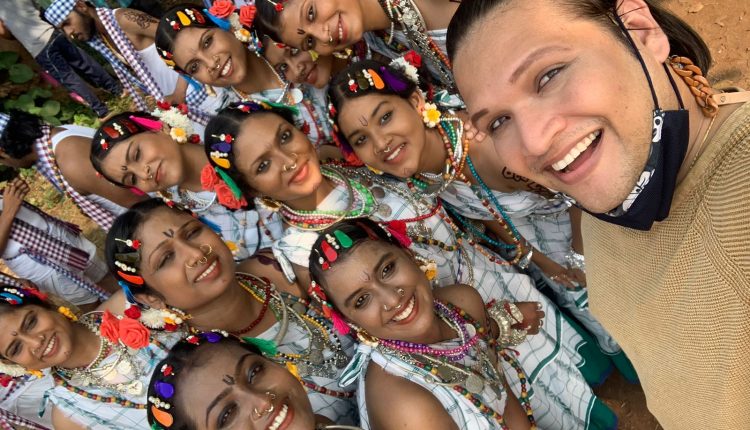 He is choreographing a sequence for an upcoming feature film titled ‘Wheels of Civilisation.’

The film is about four doctors, who visit a tribal hamlet in Odisha’s Koraput.

“These doctors find that the entire tribal community in the village is believing in superstition. They will work towards changing their minds,” says Saswat, who refuses to reveal more about the story.

As the protagonists (doctors) experience the culture of the tribal village, the film also highlights the distinct features of the tribals in Koraput, putting the spotlight on the folk art of ‘Dhemsa.’

“We have highlighted the dance form in the film. It is a celebratory dance form. When the people in the village get together during marriage time or any celebration, they dance to the tunes of dhol, tasa, tamak, changu and mahuri. They have amazing synchronisation. When they move, they flow like a river,” says Saswat, who has used costumes in white, green and blue for the dance sequence, which also features international dancers.

The film is the brainchild of an Odia doctor based in London, who wanted to highlight the land’s culture. “During Diwali celebrations, a video of my performance in front of Eiffel Tower—which had gone viral on the internet—was being played at Trafalgar Square in London. That’s how the makers of the film spotted me and they contacted me for heading the choreography team,” he added.

New COVID Variant: Will Team India’s Tour Of South Africa Be Called Off?

India To Resume International Flights From Mid-December, Except With These Countries