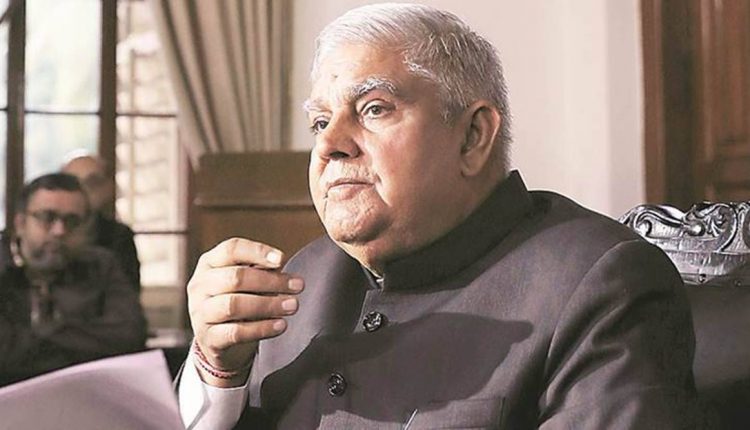 New Delhi: Last week, Vice President Jagdeep Dhankhar had hit out against Supreme Court for ‘undoing’ the historic NJAC Bill which had been passed by Parliament.

The issue came to the fore once again on Wednesday as Dhankhar brought it up during his maiden address in Rajya Sabha.

He said democracy blossoms and flourishes when its three facets — the legislature, the judiciary and the executive — scrupulously adhere to their respective domains.

“Any incursion by one institution, in the domain of the other, has the potential to upset the governance apple cart. It is disconcerting that on such a momentous issue, so vital to democratic fabric, there has been no focus in Parliament, now for over seven years,” the Vice President said.

“We are indeed faced with this grim reality of frequent incursions. This House is eminently positioned to take affirmative steps to bring about congeniality amongst these wings of governance. I am sure you all will reflect and engage in way forward stance,” the Vice President said.

“This House needs to catalyse this wholesome environment to promote synergic functioning of constitutional institutions, emphasising need to respect Laxman Rekha,” he said.

Dhankhar also tweeted the video clip of his address, with a series of strong remarks.

The NJAC Bill, passed in 2015, gave the government a role in judicial appointments, which for two decades was the provenance of Supreme Court through the Collegium system.

Petitions were filed challenging the law, contending that it would compromise independence of judiciary.

A Constitutional bench thereafter struck down the law, pointing to the Emergency of 1975-77, imposed by the then Congress government.

On Friday, Dhankar was critical of the top court at a function in presence of Chief Justice DY Chandrachud.