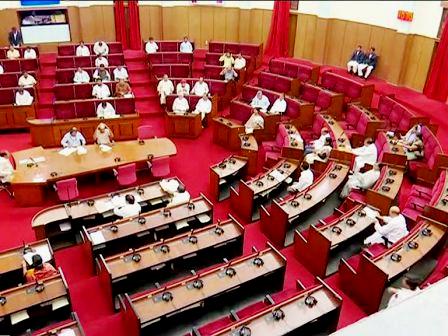 Bhubaneswar: The Opposition Congress and BJP members on Wednesday created a ruckus in the Odisha Assembly over the absence of the ruling BJD MLAs and ministers.

Drawing the attention of the Speaker, leader of the Opposition, Pradipta Naik said out of 112 BJD MLAs, including 21 ministers, only 61 MLAs and eight ministers are present in the House.

Stating that BJD MLAs and ministers including the Chief Minister are now engaged in the poll campaign in Patkura, Naik said as per the guidelines of the model code of conduct, no party is allowed to talk to any government official. But the Chief Minister has gone to Patkura to distribute rice and old age pension in gross violation of the model code.

“The BJD leaders are boasting that their party is abiding by the ideology of Biju Babu. But the fact remains that Biju Babu had never indulged in a bypoll campaign while his son is campaigning in each bypoll,” he pointed out.

Congress member Santosh Singh Saluja, said that in the absence of the ministers, a handful of ministers present in the House are replying on their behalf.

“Legislators prepare the starred questions two weeks in advance and are allowed to present the questions through the lottery system. The people of the constituency are keen to know what question their leader puts and the reply by the concerned minister. If these handful of ministers can give the reply, I don’t understand why the government has kept the remaining ministers,” Saluja said.

As commotion continued to prevail, the Speaker adjourned the House till 3 pm.