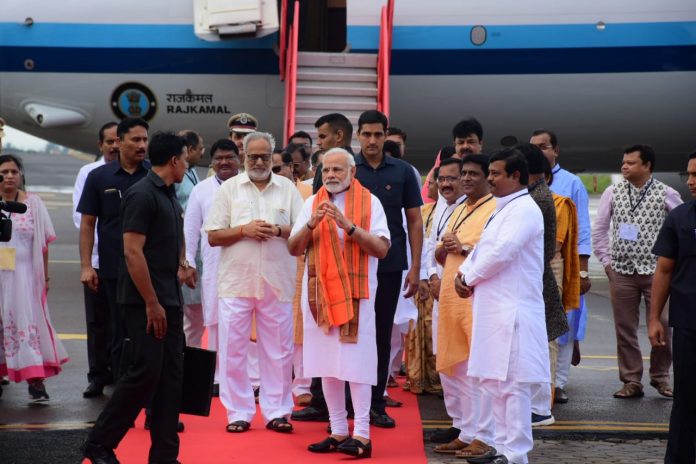 Bhubaneswar: Bhubaneswar: Prime Minister Modi on Monday lauded the state government saying, “It is for the first time in history that the Central government and Odisha are working together for the development of Eastern-India.” He also talked about ‘Sabka saath sabka vikas’ for the people of Odisha.

As part of ‘Purbodaya’ vision – a prosperous East for building a new India, Prime Minister Modi inaugurated projects worth over Rs 14000 crore in Odisha.

He dedicated and laid the foundation stone of several projects via video conferencing at the IIT-Bhubaneswar at Aragul on the outskirts of the state capital.

The Prime Minister later arrived at the National Institute of Science Education and Research (NISER) Stadium near Khurda to address a public meeting.

Earlier in the day, the Prime Minister arrived at the Biju Patnaik International Airport at about 1 pm. He was welcomed by Governor Prof Ganeshi Lal, Union Ministers Dharmendra Pradhan and Jual Oram. On behalf of the Odisha government, Finance Minister Sashi Bhusan Behera welcomed the Prime Minister.

From the airport, Modi flew to IIT-Bhubaneswar campus at Aragul where he was welcomed by Chief Minister Naveen Patnaik.

Naveen Assures Support To All Central Projects In Odisha