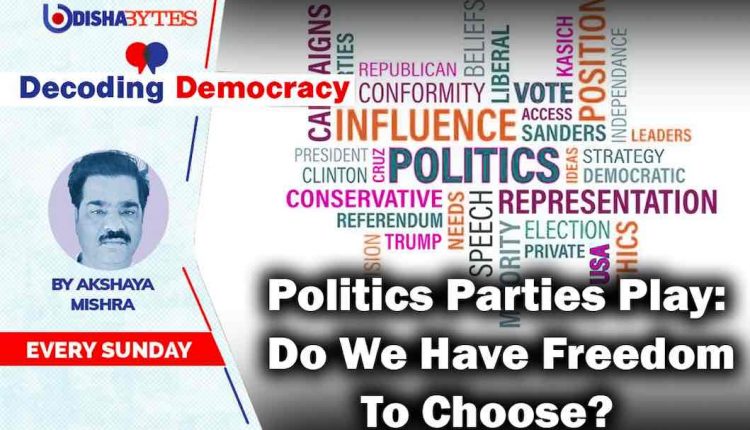 “…Politics is too serious matter to be left to the politicians,” said Charles de Gaulle, the man who rescued democracy in France post World War II. Playwright George Bernard Shaw would call politics the “last resort for scoundrels”. These remarks could well be the reflection of the general low esteem the political class is held with everywhere across the world.

People call them liars, unprincipled, manipulative, selfish and whatnot. Our movies show them in uncharitable light – as villains or henchmen of villains or as equal partners in corruption syndicates that make life hell for the common man. Our literature paints them as rogues. Most of us looking at politics from a distance are convinced that the notorious reputation is well-deserved. Many politicians don’t fit into such descriptions, but exceptions hardly matter in generalised perceptions. The truth is the perception is overwhelmingly negative. And politicians have not done enough to change that.

They wield the power to impact our lives. The decisions they make, and the policies they agree upon can make or mar us. This calls for highly qualified people on the job. However, according to public perception, the people who play this critical role in our lives are the least qualified for it. At the entry-level, politics attracts the worst of talent. It is peopled by many who are not good enough to land a decent job through fair competition. At the ground and middle levels, where politicians and people are still not too distant from each other, the former hardly present an edifying picture of themselves. Many of them are not even respectable; they are in politics because they have the money and muscle power, and the local networks to bank on, and not because of any higher calling. Speak to the common man about the local councillor or MLA or MP, you are most likely to get a negative opinion. There’s a reason why strong leaders chose to operate through bureaucracy bypassing elected representatives: the latter is simply not good enough.

Yet these are the people we keep trusting with power. Election after election we choose our representatives from the same set of politicians. This is ironic. Something does not appear in sync. If the politicians we have are so bad why cannot we have better options? What stops us from rejecting the ones we dislike and finding new ones in their place? The simple answer is we don’t have a choice. The structure of our politics is such that our options are nearly closed. In this arrangement, the wish of the voter does not matter.

Perhaps this is the biggest flaw in party-centric electoral politics. It may have provided a semblance of order to the latter, but it ends up circumscribing the freedom of choice of the voter. If political parties keep offering the same set of candidates, the voter has little choice but to go for the one he/she considers the lesser evil. The ‘None of the Above’ option introduced lately hardly serves anything more than registering a protest. It is virtually impossible for people to field their own candidate and score a victory. Even if they manage to secure one, the lone voice would have little heft in a legislative assembly or Parliament dominated by regular party representatives.

We are thus in a situation where political parties control and dictate our choices. In effect, they control what we call democracy, supposedly something which is of the people, by the people and for the people. If one is interested in joining politics, one would be lost without the backing of a party. The money at hand and the organisational reach of established parties are just difficult to match for an independent candidate. Joining a party to satisfy a personal vision is not easy either. Because finally, it’s the party’s ideology, leadership and internal dynamics that dictate how one survives and thrives in politics.

For the outsider, the situation is as complicated. If the party he likes thrusts a bad candidate on him, he lands in a moral dilemma. If the candidate he prefers belongs to a party, not of his liking then it’s the same. Voting for a competent independent candidate is as good as the vote lost, for reasons we have mentioned earlier. Then if he is ideologically neutral, by preferring a candidate he becomes an automatic subscriber to the ideology of the party the latter represents; and he may not have any fascination for that particular ideology.

The party system thus is instrumental in curtailing our freedom to choose. Imagine the confusion at the polling counter before you press the button when you are a supporter of either the BJP or the BJD, but you know the candidate you are voting for is a local strongman or a man of proven incompetence. We just have to accept what we are offered.

Is there a way out of this conundrum? If there is one, it’s not been found since the days of either Charles de Gaulle or Bernard Shaw. Despite widespread resentment over the quality of politics in general, not much thought has gone into this question. It’s time we applied ourselves to it because the net gain of power of the political class equates the net loss of power of people.