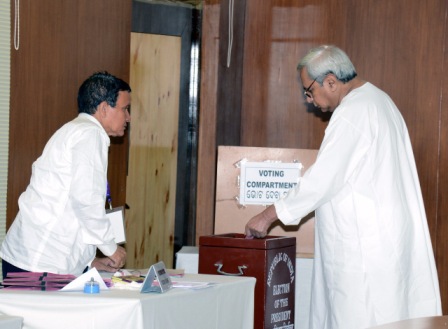 Bhubaneswar: The polling for Presidential election began around 10am at room number 54 of the state assembly here on Monday. It will continue till 5pm.
Chief minister Naveen Patnaik, Leader of Opposition Narasingha Mishra, Deputy Leader of Opposition Chiranjib Biswal, Congress MLAs Naba Kishore Das And Devendra Sharma and several other senior leaders cast their ballot.
“As clarified by the chief minister earlier, Ram Nath Kovind Ji is the party’s preference for the post. The MPs and MLAs have been requested to extend their support to him,” said food supplies and consumer welfare minister Surya Narayan Patro, who has been appointed as the polling agent of BJD.
Replying to queries of mediapersons, Patro allayed any possibility of cross-voting during the election for the 14th President of India.
Congress leader Ganeswar Behera is the polling agent for the party. Of the total 16 MLAs, 15 will cast their votes. Subal Sahu will remain absent during the voting due to health problems.
All arrangements have been put in place for smooth conduct of the election. Guidelines have been issued asking the voters to carry identity card and make preference on the ballot paper only with the pen provided by the presiding officer. No mobile phone or camera is allowed into the room.
The Election Commission of India has appointed 33 observers to monitor the process. While two observers are deployed at Parliament, all others are at the state assemblies.
Once voting is completed, the ballot boxes would be flown to New Delhi. The counting of votes is scheduled to commence from July 20.

Odisha Govt To Set Up Coronavirus Hospital At DRIEMS In Cuttack