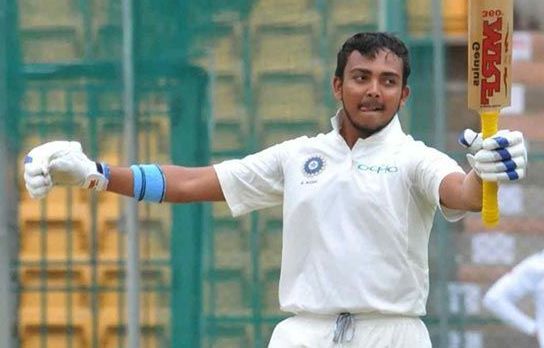 Shaw reached hundred in 99 balls before being dismissed at 134 at the ongoing match against West Indies in Saurashtra Cricket Association Stadium, Rajkot.

His century is also the third-fastest by any batsman on Test debut.  He is also the second youngest batsman to make his debut for India since Sachin Tendulkar.

‘What a moment!’ tweeted Harbhajan Singh as the 18-year-old became the second youngest Indian after Sachin Tendulkar to score a century in Test cricket.

He made his debut in first-class cricket in 2016-17 for Mumbai in the semi-final of the Ranji Trophy against Tamil Nadu. He scored a century in that game, incidentally, at the same venue as his Test debut.

The boy from Mumbai was bought by Delhi Daredevils for Rs 1.5 crore. His IPL debut was impressive too, where he scored 22 off just 10 balls. He also has a record of 546 runs from 330 balls playing for Rizvi Springfield in a Harris Shield match.

Violence In Puri Over Queue System In Jagannath Temple

If There Is Threat To Your Life, Jail Is the Safest Place: SC To Abhijit Mitra Iyer