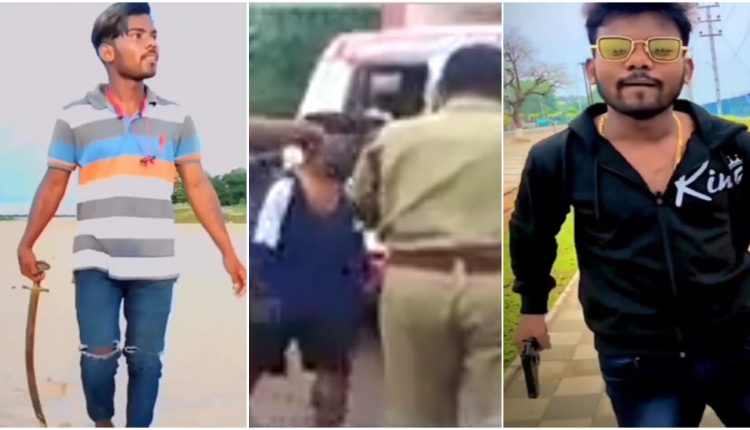 Cuttack: Even as the Twin City Commisionerate Police is on a manhunt to nab all members of ‘Koi Bhai Nahi’ (KBN) gang, which was unleashing terror on the streets of Bhubaneswar, another video of youths welding weapons has surfaced from Cuttack.

In a short video uploaded on Instagram under the name ‘Public Sandha’, which was purportedly shot at Taladanda Canal, some youths can be seen brandishing a gun and a sword while hurling abuses and threats.

According to sources, Malgodown police have picked six persons, including a girl, for questioning after the video went viral. While a fake gun has been used in the video, the sword is real.

One of those detained has been identified as Debjyoti Behera of Mangla Sahi. He was trading in fish.

The criminal antecedents of the youths and the places where the videos have been sought are being investigated, the reports added.

Police later told the media that all six have been identified. They posted the video to garner more likes, comments and shares on their Instagram. The plastic gun has been seized.

The girl said that the video was shot just for fun, but she did not know that her brother would make it viral.

Notably, the KBN gang hogged the crime spotlight after it attacked a youth at CRP Square on October 21. Later, video of over two dozen members of the gang brandishing sharp weapons and a gun, driving an SUV and reportedly dancing on the middle of the roads in the Odisha Capital with the music of Ram Gopal Varma’s 2010 political thriller Rakht Charitra playing in the background went viral, raising serious questions about law and order situation in the city. They then went underground.

Another video of the KBN gang surfaced on Wednesday in which the members of the gang were seen partying on a vehicle by parking it on the middle of a National Highway.

A team of police also raided the house of KBN gang leader Bubu Jena, son of a policeman, at Talabania near Pokhariput in the Odisha capital.

Nine members have been nabbed. While five are already in jail, two members – Chenga and Sanjay – had surrendered before police on Tuesday.

Lover Stabs Woman 18 Times After She Refused To Marry Him