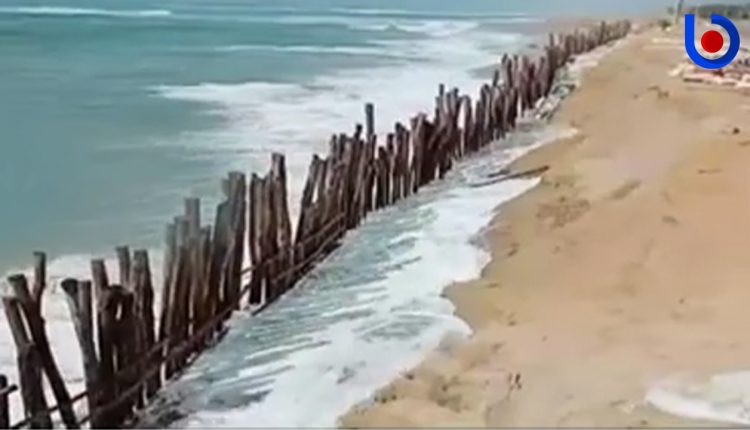 Puri: A temporary protective wall erected on Puri-Konark Marine Drive has been washed away by powerful high tide as the national highway number 316 seemed to have come under threat from frequent sea erosion.

The temporary protective structure using wooden poles and sandbags had been put in place after a stretch of the guard wall on the marine drive connecting the pilgrim town of Puri and Konark was washed away around a fortnight ago due to a similar high tide, sources said.

As the sea was rough for the last couple of days, a powerful high tide washed away the temporary structure. The wooden poles and sandbags have been swept away by the marauding sea, they said.

Stating that sea erosion has posed a serious threat to a three-kilometre stretch of the marine drive between Chandrabhaga and Ramachandi temple, locals claimed that no senior official has visited the site after the latest incident.

The erosion has taken place near the site of the eco-retreat camp being organised by Odisha Tourism. It is feared that the sea may engulf major portions of land, beaches and roads along the coastline.

After the erosion that took place a fortnight ago, senior officials had said that sea waves had eroded dunes and ingressed 1,900 metres on the marine drive.

While taking steps to save the highway from tidal ingress, officials and staff of the National Highway Authority of India (NHAI) restored it using wooden poles and sandbags.