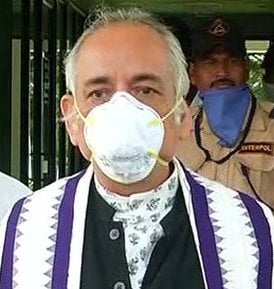 Bhubaneswar: The Gajapati Maharaja of Puri, Dibyasingha Deb on Saturday said that the Rath Yatra can be held without devotees.

Briefing the media after presiding over the Jagannath Temple Managing Committee in a video conference at the Odisha Computer Application Centre (OCAC) conference hall, he said that the meeting unanimously decided that in view of the outbreak of COVID-19, there should not be any congregation of devotees.

“The Yatra can be held by the officials of the temple administration, district administration, police and the sevayats. As about 8-10 lakh devotees will congregate in Puri to witness the grand festival, the COVID situation is most likely to aggravate further. Taking this issue into consideration, the committee said that the Yatra can be held if the state government gives a go-ahead signal,” the Gajapati Maharaja said.

He further said that the state government should take necessary steps to stop the arrival of devotees to Puri and congregate at Bada Danda (Grand Road). The restriction should remain in force from Rath Yatra till the Niladri Bije (return of the deities to the main temple).

“It is up to the state government to decide whether the Rath Yatra will be held or not. The Temple Managing Committee will abide by whatever decision the government takes,” the Gajapati Maharaja pointed out.

He also made it clear that the decision is exclusively for the Puri Jagannath Temple.