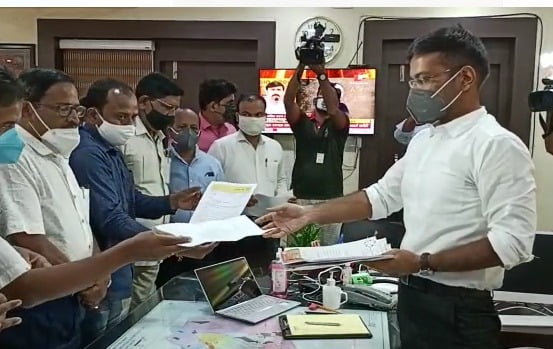 Puri: The decision of Shree Jagannath Temple Administration (SJTA) to allow entry of devotees to the temple for darshan of the deities only through the main door has led to resentment among locals.

In an appeal to the Collector Samarth Verma they sought his intervention to help revise the rules for Puri residents who face inconvenience while waiting in queues for ‘Abadha’ and ‘Mahaprasad’ on a daily basis.

Representatives of 15 public outfits met the Collector and apprised him of the inconvenience local devotees face. They urged Verma to reopen all the four doors of Srimandir for local devotees as many do not take their food without having a darshan of the deities during the holy month of Kartik.

Senior citizens, who invariably, pay a visit to the shrine find it difficult to wait indefinitely at the main entrance, the outfits cited

They also urged for introduction of citizenship passes to people residing in civic areas of Puri and their entry through four gates of the temple.

A local resident Chakradhar Mohapatra said, “The Collector heard our grievances sympathetically and promised to discuss the matter with temple administration on Thursday.”

The Collector said introduction of special provisions for citizens of Puri would be discussed at a meeting scheduled with temple administrator on Thursday.

Remnants Of Cyclone Jawad 200Km From Odisha Coast; Know The…