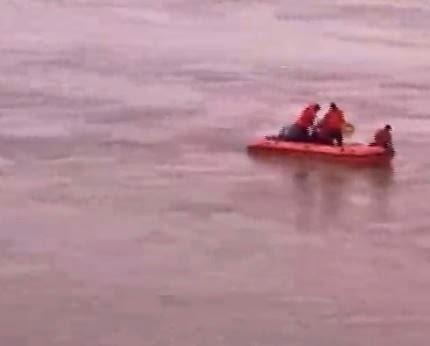 Cuttack: A joint team of ODRAF and the Fire Services personnel on Thursday resumed the operation to trace the man who had jumped into Kathjodi river the previous day.

A native of Karanja village under Niali police limits in Cuttack district, Debabrata Mohapatra had jumped into the river after an altercation with his wife while they were returning home in Jajpur on a motorcycle after witnessing Durga Puja celebrations on Wednesday.

His wife Shubhalaxmi also tried to jump into the river with their four-year-old son but was saved by a passer-by.

While ODRAF and the Fire Services personnel began an operation to trace him soon after the incident, Sadar Police later took the woman to the police station for questioning.

Talking to the media later, Subhalaxmi’s father Daitari said that he had solemnised the marriage of his daughter with Debabrata in 2014.

“My daughter is a school teacher while her husband was jobless. We were cheated into the marriage by Debabrata’s family which had then claimed that he was engaged in Tata Steel. He also used to beat my daughter suspecting her of infidelity,” he added.