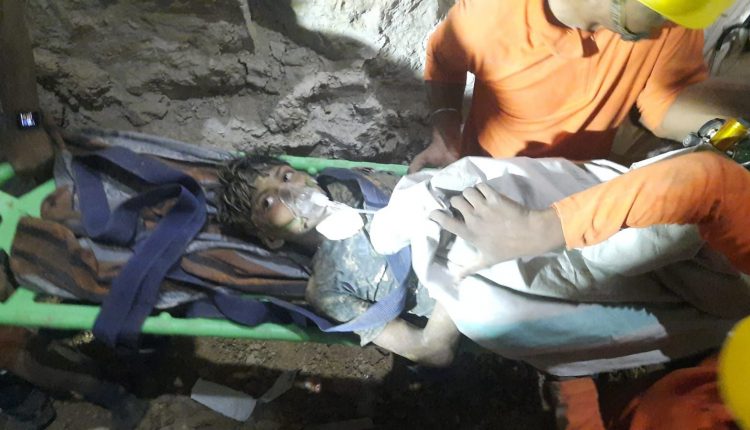 Raipur: Untiring rescue efforts spanning over four days, saw 11-year-old Rahul Sahu, a disabled child from Janjgir-Champa district, being brought out of an 80-foot-deep borewell late on Tuesday (June 14) on a stretcher. Later, he was taken to the Apollo Hospital in Bilaspur for which a green corridor was created.

Over 500 personnel, including officials of the Army, the National Disaster Response Force, the State Disaster Response Force, and local administration, were engaged in the massive rescue operation which began on Friday evening. He had fallen into the unused borewell in the backyard of his house in Pihrid village in Malkharoda development block, around 2 pm while playing.

A deep pit parallel to the one in which Rahul was trapped was dug in the rocky terrain and the two were connected through a tunnel to get the boy out of the borewell.

Chief Minister Bhupesh Baghel tweeted, “..with everyone’s prayers and relentless and dedicated efforts of the rescue team, Rahul Sahu has been evacuated safely. I wish that he recovers completely as soon as possible.”

Southwest Monsoon To Make Onset Over Odisha In 48 Hours: IMD