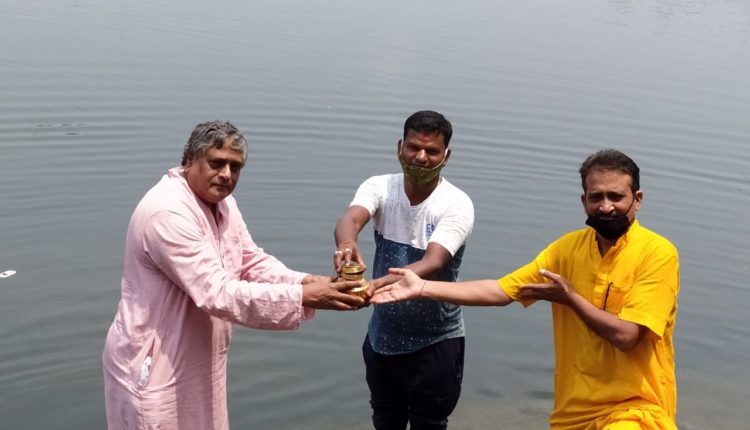 Bhubaneswar: A container of water from the holy Bindusagar tank near the Lingaraj Temple here was sent to Ayodhya for the Bhoomi Pujan Ceremony slated for August 5.

Devout Hindus from all over the country have been sending soil and holy water from religious shrines to Ayodhya since the last two weeks. Holy water from the Char Dhams, Sangam, Kurukshetra and other places has reached  Ayodhya and will be used in the ceremony. More than 10,000 different urns have already been received, and many more are on their way. The authorities at Ayodhya have assured that everyone’s faith will be respected and the material will be poured into the foundation.

President of the Maa Jageswari Yuba Sangathan Prafulla Swain said that the water of the Bindu Sagar is considered most sacred as it contains a drop of water from each of India’s sacred water bodies. Anointing the groundbreaking spot with this water will mean that water from each sacred river and pond has been used, he added.

Abiding by the social distancing norms in place, the water was collected by Swain, Anil Dhir and Rajesh Agrawal of Odisha Swabhiman and Bharat Raksha Manch from Ananta Vasudev Ghat after holding a small yagna. The members wanted to go to Ayodhya in person, but permission was denied by the administration. The water has been sent in a sealed Kamandal by Speed Post to Mahant Nrityagopal Das, the Trustee of the Shri Ram Janmabhoomi Teerth Kshetra.

Swain further said that many events are being planned for August 5, which will include holding prayers, yagnas, lighting lamps, distribution of sweets and Mahaprasad and putting up dhwajas (flags).

In the evening, lamps will be lit in all the homes of the Old Town. A special cover with Ramayana postal stamps will also be released to commemorate this grand event.

National General Secretary of the Bharat Raksha Manch Anil Dhir said that bringing the sacred soil and water from all parts of the country also symbolises the emotional connection that the people of the country have with Lord Rama.

“Ram sewaks from across the nation have waited for this moment to become a reality and this step also aims to pay tributes to them,” he added.