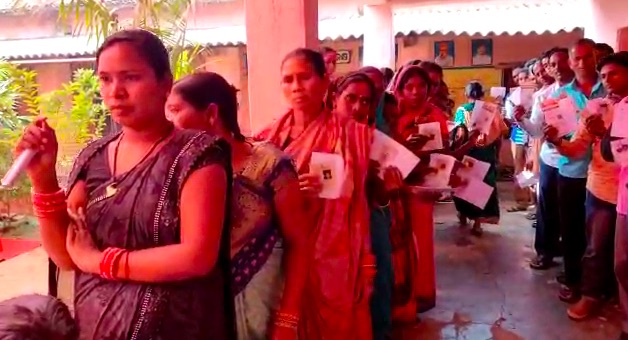 Bargarh: The final polling percentage in the by-election to Padampur assembly constituency in Odisha’s Bargarh district stood at 81.29 %.

According to the returning officer, 2,09,309 voters exercised their franchise to seal the fate of 10 candidates in the fray, including BJD’s Barsha Singh Bariha, BJP’s Pradip Purohit and Congress’ Satya Bhusan Sahu.

The constituency saw 2.24% increase in voter turnout in the bypoll against the 2019 Assembly polls, when the polling percentage was 79.05 with 2,01,928 people casting their votes.

The voting was held between 7 am and 4 pm in a peaceful and smooth manner with no untoward incident despite Maoist threat in a few pockets. Long queues were seen outside more than 70 of the 319 booths by 4 pm. Voters, who had reached the polling booths at 4 pm, were allowed to exercise their franchise.

The bypoll was necessitated following the death of BJD MLA Bijaya Ranjan Singh Bariha in October this year. The votes would be counted on December 8.

Notably, the turnout had decreased by 3% in the recent Dhamnagar bypoll compared to 2019.