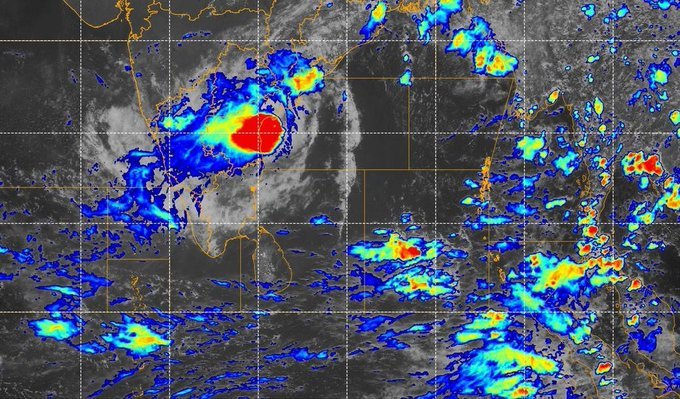 “The system is likely to weaken into deep depression tonight, and further into depression by Thursday morning,” he said, adding that the impact will be maximum in four districts of Andhra Pradesh – Krishna, East and West Godavari, Visakhapatnam.

He further said that southern Odisha will experience wind speed up to 40-50 kmph. Fishermen advised not to venture into the sea till May 12, he added.

According to IMD’s latest update, Cyclone Asani has started recurving having moved with a speed of 3 kmph in north-northeast direction in the last 6 hours and is about 40 km southeast of Machlipatnam, 50 km south-southwest of Narsapur, 130 km southwest of Kakinada (Andhra Pradesh), 270 km southwest of Visakhapatnam (Andhra Pradesh), 500 km southwest of Gopalpur (Odisha) and 620 km southwest of Puri (Odisha). It will remain a cyclonic storm with a maximum sustained surface wind speed of 70-80 kmph, gusting to 90 kmph and move north-northeastwards along Narsapur, Yanam, Kakinada, Tuni and Visakhapatnam coasts till Wednesday evening, and eventually re-emerge into westcentral Bay of Bengal by Wednesday night. Once back in the sea, it will continue to weaken — de-intensifying into a deep depression by 11:30 pm on Wednesday night and then into a depression by 5:30 am on Thursday morning.

The private weather forecaster Skymet said that the recurve process of the storm has begun wherein it will move slightly northward and then northeastward, moving along the Andhra Coast for a bit, thereafter entering the Bay of Bengal.

During the time of its recurve, rains will become slightly heavier for Godavari, Krishna and Kaveri with winds remaining on the stronger side. In fact, sea conditions will remain rough to very rough over the region. “The storm will become even slower during the time of recurve, however, the system will speed up thereafter and even weaken by tomorrow,” it added.

Umashankar Das, a senior scientist of the Bhubaneswar Meteorological Department, told the media that the cyclone is expected to have weakened into a depression by the time it reaches Odisha coast. “The weakening process will be accelerated in a few hours and the system is likely to turn into a depression tomorrow morning. It will change course tonight and merge into westcentral Bay of Bengal before proceeding towards Noth Andhra Pradesh and then move close to Odisha coast,” he said.

The maximum impact of the cyclone will be felt in the state on Wednesday and rainfall activity will continue till May 12, he added.

He further said that yellow warning has been issued for Malkangiri, Koraput, Rayagada, Nabarangpur Gajapati, Ganjam, Puri Khurda, Mayurbhanj and Balasore, which are likely to experience heavy rainfall (7-11 cm) till 8.30 am on Thursday.

Under the impact of the cyclonic storm, several parts of Odisha received light to moderate rainfall in the past 24 hours.