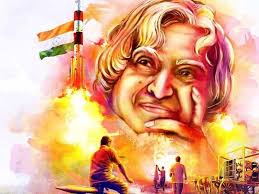 Tributes and messages commemorating the legacy of Dr APJ Abdul Kalam, the Missile Man Of India, flooded the Internet  on his fifth death anniversary.

The former president of India bid adieu to the world on July 27, 2015, after suffering a cardiac arrest while delivering a speech at IIM Shillong.

Being a people’s president, Dr Kalam was loved and respected by people across all age groups.

In 1997, Kalam was decorated with India’s highest civilian honour, the Bharat Ratna, for his contribution to scientific research and modernisation of defence technology in India.

Netizens remembered him by posting pictures exemplifying his attributes of kindness. Among them were some rare photographs of Dr Kalam.

Here’s a look at some of the tributes posted on social media platforms:

… 5 years have passed since we last met but the presence and inspiration are undiminished as always.
…Great pillars of humanity don’t die they pass on from a single individual to many ideas. #Kalam sir lives on through work people continue to do for him and inspired by him. pic.twitter.com/3fB76rTcIZ

“You have to dream before your dreams can come true.”

2. “To succeed in your mission, you must have a single-minded devotion to your goal.”#apjabdulkalam #MissileManofIndia pic.twitter.com/ptd1t3migK

In the remembrance of late ‘Dr.A.P.J.Abdul kalam’ sir. I feel proud that i’ve lived during the period of this honourable man. We must follow his words instead of worshiping just his picture…. #dailycaricature #traditionalart #apjabdulkalam #staytuned #india

Dr Kalam headed a plethora of projects which gave India a special identity in the field of nuclear and missile research. But what perhaps stood out was the pivotal role he played in the much-applauded Pokhran-II nuclear tests in 1998 which helped India emerge as a nuclear state.

The author of 25 books — including ‘Wings of Fire’ and ‘Ignited Minds’, Dr Kalam was a great advocate for education and always believed in the power of youth in shaping a nation.