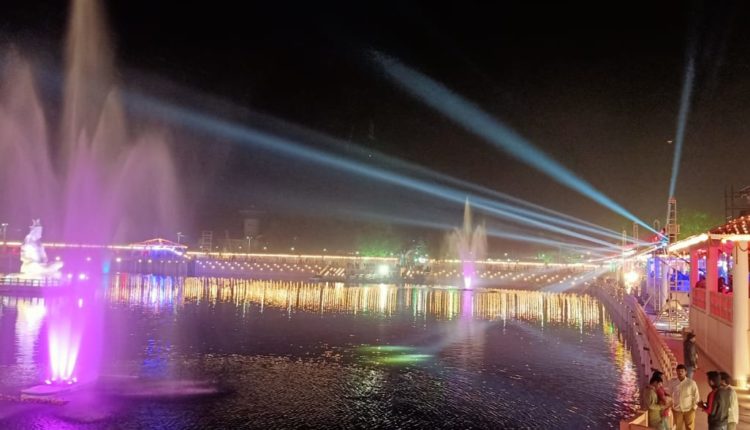 Berhampur: The much-awaited Ramalingeswar Park in the heart of Berhampur city was inaugurated by Chief Minister Naveen Patnaik through video conferencing on Monday evening.

Work on the entertainment park, which commenced on October 18, 2017, has been completed at a cost Rs 12.52 crore with the support of state government.

Spread over an area of 8.783-acres of land it includes an aesthetically designed garden, facilities for recreation activities and six watch towers for city view.

Speaking on the occasion, the Chief Minister said the park will be a landmark entertainment and recreation facility in the city. The CM also praised the citizens of Berhampur for their cooperation in the fight against COVID-19 and added that Government will keep up its efforts to develop Berhampur into an ideal city.

Leaders and district officials at the inauguration of Ramlingeswar ParkThe highlight of the park is a 35-foot high statue of Lord Shiva in yogic mudra erected in the centre of the pond with fountains and lighting to accentuate its beauty. The ghats have been developed with floating jetty and provision of boating. Kiosks for food stall and handicrafts have also been built, said Commissioner BeMC Sidheswar Baliram Bondore.

Importance has also been given to parking area as the facility is located in the heart of the city. Wide parking slots have been designed for visitors.

Since 1870 Ramlingam Tank was a private property and was in legal battle since many years. However, the trustee for development of the tank had allowed BeMC for renovation and inked an agreement with the civic body.

During 2011 Executive Engineer, Irrigation department who prepared a detailed project report (DPR) and submitted it to the state government to develop the Ramlingam Tank into an amusement park at a cost of Rs.5.75-crores could not proceed further due to legal hassles.