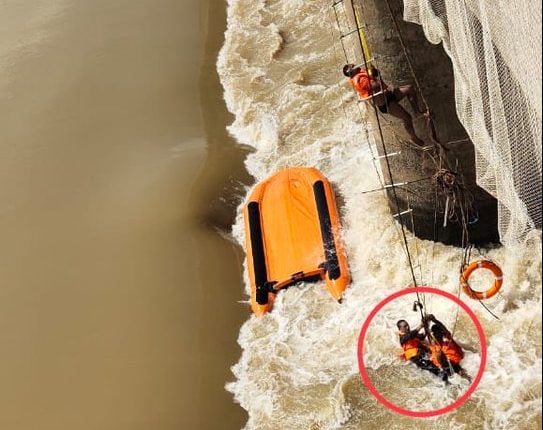 Bhubaneswar: ODRAF personnel Sitaram Murmu is missing after the boat of firefighters overturned in the Mahanadi during the operation to rescue a tusker trapped in the swirling river waters near Manduli bridge in Cuttack on Friday, sources said.

There were five ODRAF personnel and two journalists of a local news channel, Arindam and Pravat Sinha, on the powerboat deployed to help the jumbo move from the point where it was stuck.

The ODRAF boat’s engine failed, and it was pulled in by the strong current of water.

Five among them were rescued in a critical state and rushed to SCB Medical College and Hospital in Cuttack. “Arindam was received dead. We tried to revive him for over an hour,” SCB superintendent Bhubananda Moharana told the media.

“Pravat is critical and in the ICU of the medicine department. Condition of one of the ODRAF personnel is critical,” he added.

Chief Minister Naveen Patnaik and other political leaders of the state have mourned the demise of Arindam in the unfortunate incident. National Disaster Response Force (NDRF) DG Satya Pradhan has also expressed shock over the death of journalist Arindam Das.

Meanwhile, the operation to rescue the tusker is still on.