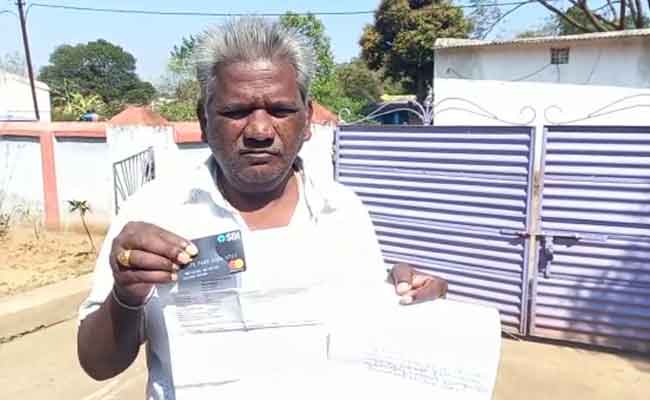 Nabarangpur: In the latest incident of online fraud in Odisha, a retired government official in Nabarangpur district lost over Rs 1 lakh from his bank account.

Unlike other victims of such frauds, however, Arjun Nayak had neither shared any OTP nor clicked on any link. And yet more than Rs 1 lakh was surreptitiously withdrawn from the account of Nayak, a resident of Khatiguda in Tentulikhunti block.

The money was reportedly withdrawn from an ATM in Bhandaripokhari area in Bhadrak district.

According to reports, Nayak is a retired employee of Indravati Hydro Electric Project. After retirement, he had received over Rs 5 lakh which he deposited at the State Bank of India branch at Indravati.

A few days ago, the elderly man fell ill and went to Vishakhapanam for treatment on February 14. After consulting doctors there, he had withdrawn Rs 9,000, Rs 6,000 and Rs 2,000 in three phases from an ATM. He returned home on February 17.

On February 19, Nayak received a call from an unknown man who asked him if he had withdrawn Rs 10,000 from his account. Then the caller cut the call. Nayak called back on the number several times, but no one received the call.

Getting suspicious, Nayak took a mini statement of his bank transactions from an ATM. It was then that he discovered that more than Rs 1 lakh was withdrawn from his account in 10 phases.

He immediately informed about the matter to the bank manager and also registered a police complaint.

Police said investigation in the matter is on.

Prime Accused Nabbed Within 24 Hours Of Threat Calls To Ashram Chief In Odisha!

Cuttack Doctor Duped Of Over Rs 77 Lakh In Online Fraud