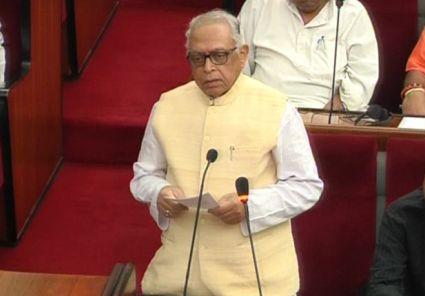 Bhubaneswar: Odisha Speaker Surya Narayan Patro adjourned the Assembly till 3 pm on Saturday due to an uproar by Congress members.

The Opposition MLAs were demanding the tabling of the annual accounts audit report of all universities in the House.

Raising the issue during zero hour, leader of the Congress Legislature Party (CLP) Narasingha Mishra said according to the Orissa Universities Act, 1989, the accounts audit report of all universities in the state should be presented in the Assembly. But the government has not been presenting the audit report of a single university in the House for the past 20 years, he added.

Mishra asked the Speaker to give a ruling on this matter and direct the government to take steps in this regard. When the Speaker refused to do so, Congress members rushed to the well of the House and shouted slogans against the government.

Unable to run the proceedings, the Speaker adjourned the Assembly till 3 pm. He later called an all-party meeting to resolve the matter.

Mobile Internet Speeds Down By 50% In India: Report