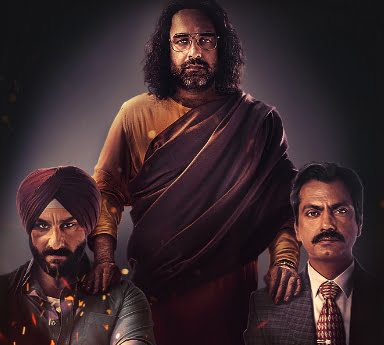 After the huge success of the first season of Sacred Games, I think a lot of actors went to the show runners and requested them to put more profanity in the dialogues. Swearing gives an extra edge to the personalities but if not properly executed, can feel unnatural. Nawazuddin Siddiqui was born to swear. The words are forged in his mouth with the precision of Damascus Steel in ancient Levant. For some of the other actors, the use of expletives comes off as forced. This is the only grouse one can have with an otherwise almost flawless cast. Even minor characters steal your attention in the few scenes they are in.

The writers must be given credit for their thorough research to juxtapose historical events with the show’s plot. I can’t remember another Indian TV show that has done this so craftily. The loose ends of the first season are neatly tied in the second season as Gaitonde’s narration guides us through a maze of intricacies. There are some new additions like Ranvir Shorey and Kalki Koechlin but Amruta Subhash, who you might remember from the Marathi drama Killa, is the pick of the bunch.

Sacred Games Season 2 plays out more like a ballad because the characters and their motivations and dilemmas are far more interesting than the actual story itself, which is not complicated at all; a brainwashed cult and cross-border terrorists plan a nuclear attack on Bombay to start a nuclear war and jump start the world. The show keeps you hooked but there are several times one feels like asking whether that sub plot or this scene or this character was necessary. Though brilliantly enacted, a lot of the characters are one-dimensional. I wonder if they overachieved with Season 1 and had little left to do in terms of character development in the second season. If they were only filling the pages to cater to Netflix’s time format, I guess they did a decent job of it.

Religious fundamentalism, propaganda, and an intolerant, rapidly deteriorating and hateful society is the general theme that has been cleverly portrayed with the peppering of scenes related to current events. Sacred Games 2 does feel like being made from an atheist’s perspective and one particular scene has already riled up a few individuals.

I am not sure, but perhaps the writers have paid homage to some other recent popular shows like Wild Wild Country, Narcos, Chernobyl and Dark by adapting their styles in certain scenes though the Indianness is maintained through the dialogues. There is a lot of internet chatter about the supposed unsatisfactory ending. I really had no problem with it and the way they panned out the story. The ambiguous end really seemed a better choice than a definitive end.