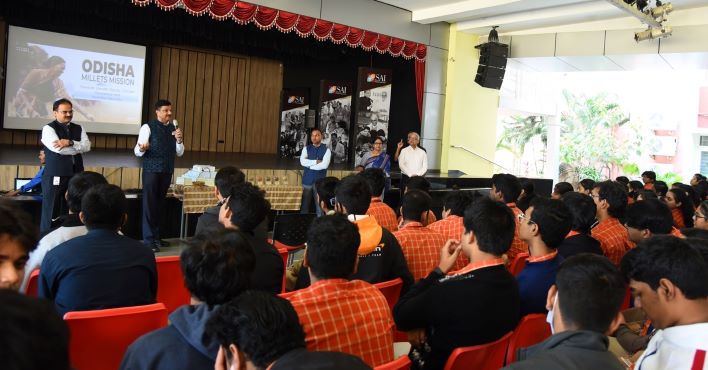 SAIoneers assembled at Indraprastha Auditorium in the one-of-a-kind event, to acknowledge certain superfood and its journey from being the ‘poor man’s grain’ to the powerhouse of nutrition.

The students put up a soulful rendition to welcome the dignitaries, and followed that with an insightful presentation about Millets Mission from a gender equity, climate resilience and nutritional security context.

The event was graced by eminent dignitaries: Shri Prem Chandra Chaudhary, IAS, Director of Agriculture and Food Production, Odisha as the Guest of Honour &

“I can list 10 reasons why millets are good for the planet. From proffering an economic cost of cultivation, more profit to farmers, low glycaemic index, to being a one stop solution for biggest of global challenges such as climate change, obesity, rural poverty and what not,” Dr Padhee said.

Elated to see millets being added to the cafeteria menu for SAI International students, Dr Padhee added: “We are often referred to as the diabetes capital and millets will address that too because of its low glycaemic Index. I’m sure that SAIoneers, as the more conscious citizens of the future, will have a long and heathy life by amassing numerous health benefits of millets.”

Guest of honour Prem Chandra Chaudhary, Director of Agriculture and Food Production, stressed on the values of millets.

“One glass of Ragi is equivalent to 3 glasses of milk. That’s how powerful these small-seeded cereals are, which also happen to be climate resilient. I can vouch about how every country of the African sub-continent supports the cultivation of this crop. I am honoured to inform that I’ll be soon representing the state’s model in an International Millets Forum to be conducted at Rome,” said Chaudhary while addressing the students.

SAI International Education Group’s chairperson Dr Silpi Sahoo said it’s a great honour for citizens of Odisha that the prestigious Cambridge University is studying Odisha Millets Mission as one of the possible alternatives to Green Revolution through TIG2RESS initiative.

“This initiative also caters to the sustainability aspect for farmers through usage of environmentally sustainable production methods,” said Dr Sahoo.

A Q & A session was conducted towards the end of the event, where SAIoneers had their queries on the mission answered by the dignitaries.