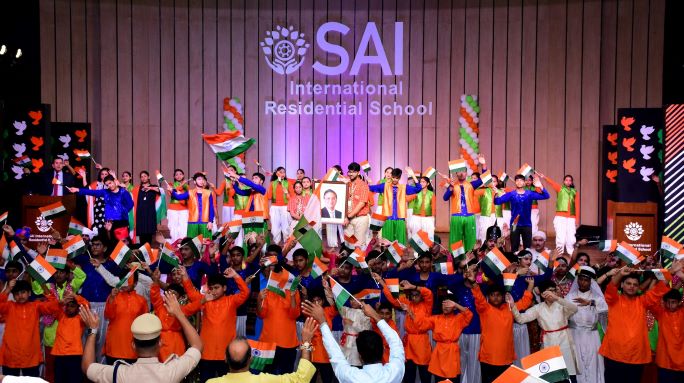 Mishra, who was Chief Guest at the Investiture ceremony of SIRS on Independence Day, enlightened SAIoneers on the role of police in society, highlighted the importance of law and order and informed them how the police keep a tab on criminal activities.

Newly-elected Student Council members and office-bearers of different Clubs of SIRS were inducted with badges and sashes in the presence of DCP Mishra and Dr Silpi Sahoo, Chairperson SAI International.

The Investiture Ceremony began with Sai Vandana, followed by the Chairperson’s welcome address.

The Head Boy and Head Girl highlighted the importance of dedication, hard work, responsibility and vigilance to carry forward the important roles bestowed upon each member.

The entire team took an oath to deliver their duties with responsibility and diligence, and faithfully carry the baton and legacy of Founder-Chairman Dr Bijaya Kumar Sahoo.

“Leadership is all about dedication, devotion, and diligence in performing once duties and withhold the flag responsibly. SIRS is not just any other school but a home away from home, which instils the leadership skills along with other 21st century skills in students,” Dr Silpi Sahoo said.

SAIoneers put up a grand and colourful cultural programme to commemorate 75 years of Independence.