Sambalpur University VC Sanjiv Mittal Goes On Leave, No Govt Action Yet On Allegations Against Him 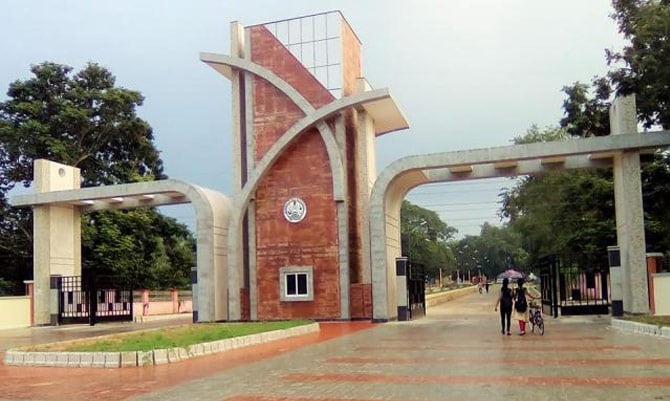 Sambalpur: Even as the state government has taken no action on the allegations of embezzlement of funds, abetment of suicide by a contractual staff and providing incorrect information about scholarly achievements against Vice-Chancellor of Sambalpur University Sanjiv Mittal, he has gone on leave and handed over charges, causing concern among the students of the university and the stakeholders.

The vice-chancellor handed over the charges to chairperson of the university’s PG Council Dr Sanjukta Dash after sending the leave application to Chancellor’s office on Monday. Though the official grounds of his leave have not been known, unofficial sources cited personal reasons.

As per the speculations making the rounds in university campus, Mittal may go on long leave to escape official action on the basis of the allegations against him.

While Lajpat Rai Law College Alumni Association has lodged an FIR against Mittal accusing him of embezzling funds from the college, Burla police has filed a case against him over the self-immolation of the university’s contractual employee Dinabandhu Mishra.

In the FIR, the Association alleged that Mittal illegally transferred Rs 69,67,000 from LR Law College to the university and misappropriated it. It has lodged the complaint in this regard at Dhanupali police station in May this year.

In the suicide case of Mishra, the Burla police has booked the vice-chancellor and Warden Biswajit Satpathy after the former’s son lodged a complaint. Mishra, who was a contractual employee of the university, was allegedly harassed and abused by Mittal. The employee took the extreme step of immolating himself when the academic council meeting was underway on the university campus on April 20 last year.

In another fund embezzlement allegation, the VC had transferred Rs 29 lakh from Rs 33.64 lakh fund of Swatchha Vidyalay Abhiyan Prakalp to his relatives’ accounts. While Rs 25 lakh was transferred to the account of Mittal’s son Tanmay Mittal on November 18, 2021, the VC again transferred Rs 4 lakh to his wife Sunita Mittal’s account on December 12, 2021.

However, after complaints were lodged with the Chancellor of universities and the Higher Education Department regarding illegal transfer of money, Mittal reportedly refunded the money.

On top of these allegations, Mittal faces the accusation of providing incorrect information about his scholarly achievements in his application for the VC post. A group of persons including former senate members of the university, lawyers and social activists filed a complaint with the Chancellor in July last year, alleging that Mittal has not provided correct and relevant information about his scholarly achievements (contribution to journals and authoring books) in his application submitted in December 2020.

Mittal, with 31 years of teaching experience in business management behind him, was appointed as the VC of the university in January.

In the application, Mittal mentioned that he has authored eight books indexed in Scopus – a bibliographic database containing abstracts and citations for academic journal articles. But, the ex-senate members alleged that Mittal has not mentioned whether the books are authored by him or are co-authored or joint-authoured. Besides, there is no mention of the title of books or names of the publishers, year of publication and total number of pages.

Stating that it amounts to suppression of facts, the complainants alleged that Mittal had mentioned that he has 111 publications to his credit but provided information of only 25 publications, which were published by Scopus/SCI (Scientific Citation Indexing) journals. On scrutiny, only 4 articles were found indexed in Scopus and the rest in SCI/ESCI (Emerging Sources Citation Index).

The vice-chancellor did not respond to repeated calls by Odisha Bytes for his comments on the allegations.