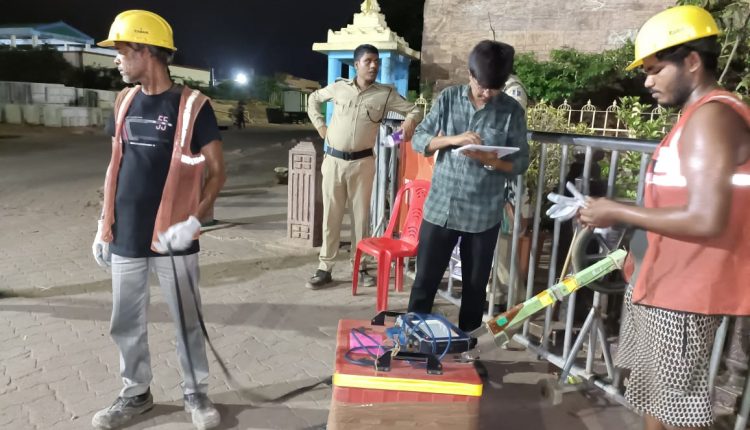 Puri: The controversy surrounding Puri Heritage Corridor Project is refusing to die down with opposition cornering the Odisha government over every alleged false step in implementing the work to transform the Pilgrim Town into an international place of heritage.

Three days after a war of words with Puri MP Pinaki Mishra, whom he had accused of ‘misleading’ people over ground-penetrating radar survey (GPRS) and impact assessment study, national spokesperson of the BJP Sambit Patra on Sunday questioned the late-night activities around the 12th-century shrine. “The area was dug up using JCB machines without conducting a GPRS late in the night and now, again the survey is being undertaken away from the public eye at night,” he alleged.

According to reports, some people were seen carrying out some inspections from Kakudikhai temple in the southeast corner of the Srimandir to the Emar Mutt and other nearby spots with some machines late on Saturday. They identified themselves as officials of Geocarte Radar Technology Private Limited, conducting the GPRS on behalf of IIT Gandhinagar.

The Odisha Bridge & Construction Corporation (OBCC), the executing agency, has reportedly asked the institute to conduct the GPRS and this has been going on for the past two days.

“The Puri MP had lied about GPRS being conducted despite the ASI affidavit after joint inspection with OBCC stating just the opposite. Now, it is being done late at night,” Patra said.

The BJP leader also questioned if the Archeological Survey of India (ASI) has been informed about the ongoing GPRS, which he alleged is being conducted in an unscientific manner. “if it is not aware, then it is illegal. The Odisha government and Pinaki Mishra are trying to fool the people of the state. The Puri MP needs to explain this to the public,” he added.

While Patra had earlier accused the Puri MP, who had defeated him in the 2019 elections, of misleading people, the Parliamentarian had said that allegations about digging without GPRS are baseless. “The state government’s affidavit in the High Court will clarify all the aspects. All that’s needed is a little more patience and a little less malice,” Pinaki added.

The ASI, in its affidavit to the Orissa High Court, had submitted that no GPRS was conducted to ascertain the archaeological and historical importance lying buried in the subsoil of 75m radius (Construction Zone) of the centrally-protected monument before the commencement of the project. No heritage impact assessment studies were also conducted and the ongoing construction work of the Puri Heritage Corridor may have caused damage to the 800-year-old Jagannath Temple. “There is every possibility that the agency OBCC during the excavation or soil removal might have destroyed the archaeological remains of the heritage site,” the affidavit added.

Notably, three broken lion sculptures have been found at the spot where the ancient Emar Mutt once stood.

Meanwhile, the Shree Jagannath Temple Managing Committee on Saturday resolved to continue the ongoing Pwork within 75-metre of the Meghanad Prachir. All work within the prohibited and regulated zones will be executed in consultation with the ASI as per the directions of the HC, it added.

The pilgrim shelter/reception centre will be built beyond 100 metres of the 12th-century shrine and the height restricted within the limits of Meghanad Prachir. An access road for commuters will also be developed and more land will be acquired for the purpose if required. All the work will be as per the Kalinga style of temple architecture.

The managing committee also approved housing proposal for homeless temple servitors, which will be developed at two locations on about six-acre with all basic civic amenities, and decided o take up registration of the Adarsh Gurukul society by-law on priority so that the academic session can start within two years’ time. Gajapati Dibyasingha Deb presided over the meeting where terms and conditions were finalised for establishing the Gurukul for children of Srimandir servitors. An MoU in this regard will soon be signed, chief administrator of SJTA Vir Vikram Yadav said.

Bhubaneswar, Cuttack Wake Up To Wet Sunday Morning; Check Forecast For Next 3 Hours

Two Killed In Car Crash On Puri-Satapada Highway In Odisha