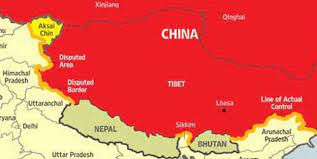 New Delhi: New satellite images revealed Beijing has stepped up its military activities and built airbases near Tibetan regions. This comes in the wake of a recent clash between Chinese and Indian soldiers near the Line of Actual Control (LAC) in the Tawang region.

According to new satellite images, China has positioned a large number of fighter aircraft and high-resolution as well as long-range drones near the border regions with India.

The images released by Maxar show China has built Bangda Airbase – nearly 150 km away from Arunachal Pradesh’s border and deployed WZ-7 ‘Soaring Dragon’ drones. This is the same drone which China unveiled last year and was termed “state-of-the-art” citing some advanced combat features. The most advanced intelligence drone can fly non-stop for up to 10 hours and is capable of sending high-resolution images to cruise missiles which eventually assist it in targeting enemies on the ground.

The new images further disclosed how the Chinese government has been preparing for any critical situations by developing three air bases – Bangda, Shigatse and Lhasa – located near the border regions. These airbases are located nearly 200 km from the Indian boundary. Lhasa, which is nearly 150 km from the Indian border, is also constructing a second runway parallel to the earlier one.