Shakti Peethas In Odisha & Their Significance For Shaktas 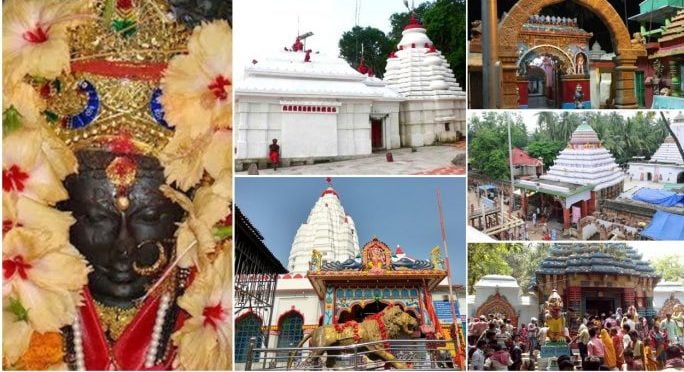 The Goddess has been worshiped in India since Vedic times. Scriptures say everything emanates from her. She is the source of Shakti. The beginning and the end….The Whole creation lives in her. Shakti is a concept or personification of the divine feminine creative power, sometimes referred to as “the Great Divine Mother” in Hinduism.

This Goddess Shakti, the Goddess of power, is said to be the complete incarnation of the Adi Shakti. Shakti is the presiding deity of the Shaktas, one of the three streams of Hinduism.

Some of the great religious texts like the Shiva Purana, the Devi Bhagavata, the Kalika Purana and the Astashakti recognize Bimala (Paada Khanda or feet) inside the Jagannath Temple in Puri and Tara Tarini (Stana Khanda or breasts) at Purnagiri near Berhampur in Odisha.

The Biraja Temple or Girija Kshetra, Oddiyana Peetha is believed to be another another Shakti Peetha in Odisha. An Oddiyana is an ornament worn by women around her navel. According to Tantra Chudamani, Sati’s navel fell in Utkala  (old name of Odisha) and is known as Biraja Kshetra. Sri Adi Shankara in his Astadasha Shakti Peetha stuti describes the Goddess as Girija.

There are 12 Shakti Peethas in popular Odia culture. They are

There are 51 Shakti Peethas across the sub-continent, where the Goddess is worshipped as manifestations of Dakshayani -Sati, later known as Parvati or Durga. Various legends explain how Shakti Peethas came into existence.

The most popular is based on the death of Goddess Sati by self-emulating at the Yagna being performed by har father Daksha. Out of grief and sorrow Shiva carried Sati’s body, reminiscing about their moments as a couple and roamed around the Universe with it. Seeing this state of Shiva cannot continue for long, Vishnu cuts her body into 52 pieces with his Sudarshan Chakra, The body parts fell on Earth and became sacred sites where all the people can pay homage to the Goddess.

There are 51 or 108 Shakti Peethas by various accounts, of which, between 4 and 18 are named as Maha (major) in medieval Hindu texts. Most of these historic places of Goddess worship are in India, but there are seven in Bangladesh, three in Pakistan, two in Nepal and one each in Tibet and Sri Lanka.