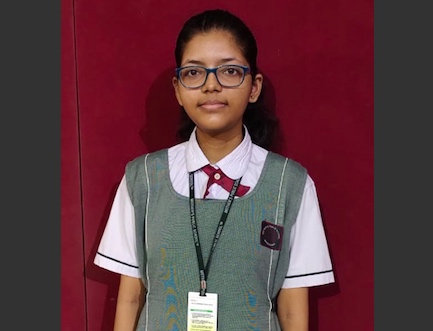 Bhubaneswar: Shreya Pattanayak of Mother’s Public School in Bhubaneswar has got a perfect score in the Central Board of Secondary Education (CBSE) Class X exam, the results of which were declared on Friday.

While Shreya Pattanayak scored 500 out of 500, 62% of students have achieved 90% and above, the school said in a release.

Poly Patnaik, founder and principal of the school, congratulated the students and teachers and applauded them for their wonderful performances.

Notably, the students pass percentage in Bhubaneswar stood at 96.46 this year with the city being placed 7th region-wise.

In Class XII, more than 50% students of the school have scored 90% and above in all streams of Science, Humanities and Commerce. Amlaan Akshayanshu Sahoo and Karan Pattanaik topped the Science stream with 98.8% followed by Shivam Mohapatra with 98.4% and the third place was bagged by Rohan Jena and Prajna Samriddhi Panda with 97.8% belonging to Bhubaneswar branch.

Prateek Pratyus Dash stood first in the Commerce stream with 97.4 %, followed by Soumendra Sahoo and Abhijeet Durga at 95.40% and the third place was bagged by Disha Gupta and Sheetal Kyal with 95.2%. The Humanities branch excelled in its performance with Anushree Rath scoring 99%, followed by Sonam Sanket at 98.6% and Preetesh Patri at 98%.