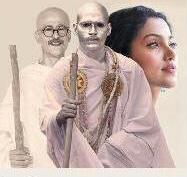 The movie is made by Odia producer Santosh Sethi and directed by Avinash Nanda, also from Odisha. The film won the first prize in the Biographical Film category in the festival.

The movie has an inspiring story of Mohan Mahapatra, a 22-year-old ‘Clean India’ activist from Odisha.

Mohan, also known as Sai Ram Gandhi, had travelled seven states on foot spreading the message of Swachh Bharat Abhiyan. A student of theatre in Odisha, he set out on a padayatra from Jagannath Temple in Puri on June 26, 2016, and reached Delhi in October 2018.

With silver paint on his face and in Mahatma Gandhi attire, Mohan walked 2000 km in those two years.

The movie will inspire the people of India to keep the environment clean and to live a healthy life, said director Avinash Nanda.