Stage Set For Bahuda Yatra Of Divine Siblings In Puri; Know The Timings 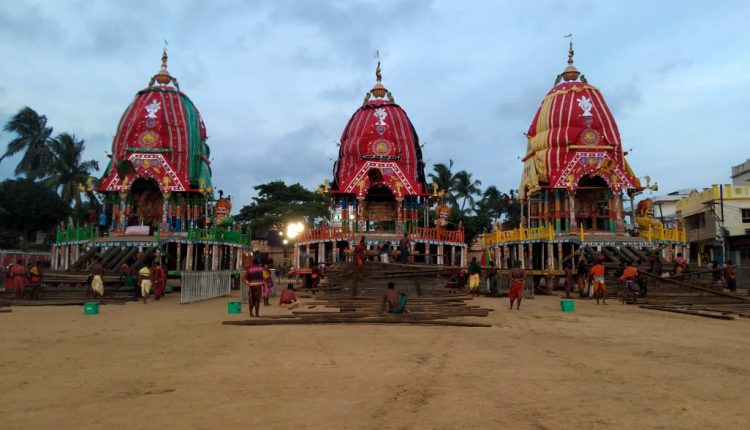 Puri: With a few hours left for the Bahuda Yatra (return journey) of Lord Jagannath and his siblings, the Shree Jagannath Temple Administration (SJTA) and Puri district administration have completed the preparations for the annual event.

Speaking to the media after presiding over a preparatory meeting at the Niladri Bhakta Nivas, Chief Administrator of SJTA, Krishan Kumar said second RT-PCR test of most of the government employees has been completed and the test of the remaining employees will be done by this evening.

Similarly, the second phase RT-PCR test of the sevayats has been completed, he added.

Kumar also said keeping in view the the rising humidity, the fire service personnel will sprinkle water on Bada Danda (Grand Road) at regular intervals during the pulling of chariots. Arrangements have also been made for adequate supply of drinking water for the sevayats at all stand posts.

Informing about the conduct of rituals, he said the sevayats have assured to conduct all rituals of the deities in time. The timings are as follows:

Chhera Panhara of three chariots by Gajapati Dibyasingha Deb between 2.30 pm to 3.30 pm

Pulling of chariots will begin at 4 pm

Meanwhile, prohibitory orders under Section 144 (CrPC) have come into effect in Puri from 8 pm (Monday) and will continue till 8 pm of July 21 to restrict movement of devotees on the Grand Road during Bahuda Jatra.

No person will be allowed to witness the festival from rooftops or balconies of buildings, hotels, dharamshalas, lodges and guest houses located along the Grand Road.