Student Resorts To ‘Gandhigiri’ For Being Denied Admission, Sells Snacks Before School In Odisha’s Ganjam 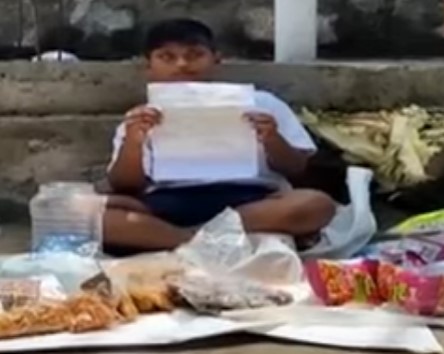 Berhampur: After being denied admission to a school, a minor boy resorted to ‘Gandhigiri’ by selling snacks in front of its main gate in Odisha’s Ganjam district.

Krushna withdrew Shiva from the Project School and obtained the transfer certificate (TC) from its authorities. On August 13, he went to Kumari Upper Primary School for admission of his son. But the school authorities reportedly did not allow the admission and told Krushna to produce online certificate for the purpose.

Krushna again approached Chadheyapalli School, but he was told that since he had been issued the physical TC, there was no need for online certificate. When he informed Kumari School about it, the latter insisted on online certificate. Even after running to two schools several times, Shiva could not be admitted in either of those.

Being deprived of education, Shiva’s father told him to start the protest. Wearing the school uniform, Shiva sat down under a tree in front of Kumari School and started selling dry snacks like puffed rice, biscuit, mixture, potato chips and roasted chickpeas to the students on Thursday.

Speaking to media persons, Krushna said it was unfortunate that a student, who was interested in studies, was being deprived of it for bureaucratic process. “My son will continue the peaceful protest till the school authorities take steps for his admission,” he said.

When contacted, the headmistress of Kumari Upper Primary School headmistress refuted the allegations. “The boy’s father submitted the transfer certificate to me on Friday last. I had called him to discuss the matter on Thursday. But he did not turn up,” she said.

Expressing her ignorance about the novel protest by Shiva, the headmistress said his admission process would be initiated soon.