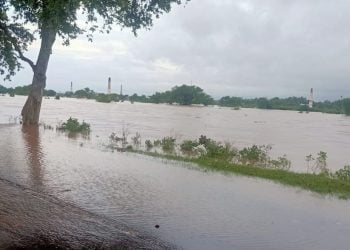 Bhubaneswar: A flood-like situation has occurred in the Subarnarekha following heavy rainfall triggered by Cyclone Yaas in the upstream of the river in Jharkhand.

The river is flowing above the danger mark at Jamosala ghat in Balasore district with the water level touching 50.88 metres against the danger level of 49.16 metres, informed Special Relief Commissioner (SRC), Odisha, Pradeep Jena.

“Due to heavy downpours, the neighbouring state opened the Galudihi barrage. Due to the influx of water from the barrage, the water level increased in the downstream in Odisha,” he said.

The river, however, is flowing below the danger mark at Rajghat.

The local administration has alerted the people residing close to the river and they are likely to be shifted to safer places.

The Baitarani river has also been swelling due to cyclone-induced incessant rain. It had touched the danger level at Anandpur in Keonjhar on Thursday.

The authorities, however, said there is no major risk as the water will recede gradually.