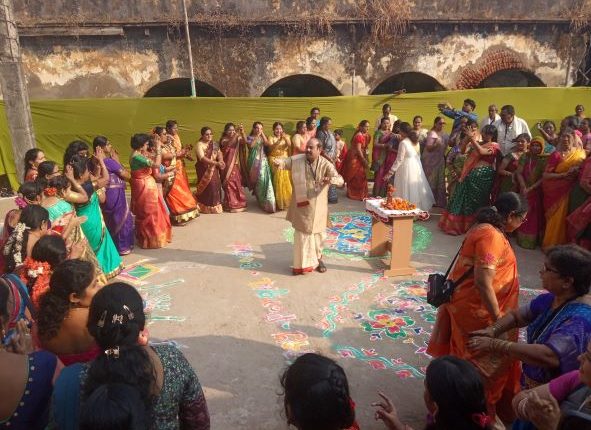 Berhampur: Telugu people under the aegis of Andhra Bhashabhivardhani Samajam (ABS) celebrated ‘Sankranti Sambaraalu’ with a Pongal flavour at Prakasam Hall in Berhampur of Odisha’s Ganjam district on Saturday.

Wearing new dresses, Telugus greeted each other with ‘Happy Pongal’ on the day which is celebrated as Makar Sankranti in Odisha. Odia people also joined them in the celebrations on the occasion.

The entire place was decorated with colourful rangolis to celebrate Sankranti Sambaraalu or the Pongal celebration. They performed ‘Bhogi’ with ‘Gobbammalu’.

“Sankranti Sambaraalu is a traditional harvesting festival which is celebrated to enlighten our younger generations. Since congregation was suspended for the last two years due to COVID pandemic, we could not organise celebration. This year, a large number of people belonging to about 50 Telugu social, literary and cultural organisations have turned up to participate in the celebration,” said P Satyanarayan, chairman of Sankranti Sambaraalu Coordination Committee.

He further said Telugus are a very formidable group in Berhampur. While they have a population of 80 lakh in Odisha, 50% of 4.15 lakh population in Berhampur are Telugus.

The Telugus in Ganjam have also commenced their own brand of Sankranti celebrations from the day with spectacular rangolis, crackling bonfires and colourful cultural shows. While the first day of the festival was celebrated as ‘Bhogi’ on Saturday, the second day would be celebrated as ‘Pongal’ or Makar Sankranti, ‘Kanuma’ on January 16 and ‘Mukknam’ on January 17.