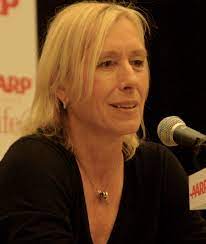 New Delhi: Tennis legend Martina Navratilova, an 18-time Grand Slam singles champion has been diagnosed with both throat and breast cancer, BBC reports. It quoted Navratilova as saying that both cancers had been caught at an early stage. “The double whammy is serious, but fixable, and I’m hoping for a favourable outcome. It’s going to stink for a while, but I’ll fight with all I have got,” she was quoted as saying. Navratilova will start treatment in New York later this month.

“Martina Navratilova has been diagnosed with stage one throat cancer,” read the statement. “The prognosis is good and Martina will start her treatment this month, read a statement published by the tennis star’s representative in The Guardian.

“The cancer type is HPV and this particular type responds really well to treatment. Martina noticed an enlarged lymph node in her neck during the WTA finals in Fort Worth. When it didn’t go down, a biopsy was performed, the results came back as stage one throat cancer.

“At the same time as Martina was undergoing the tests for the throat, a suspicious form was found in her breast, which was subsequently diagnosed as cancer, completely unrelated to the throat cancer.

“Both these cancers are in their early stages with great outcomes. Martina won’t be covering the Australian Open for Tennis Channel from their studio but hopes to be able to join in from time to time by Zoom.”
Share FacebookTwitterGoogle+ReddItWhatsAppPinterestEmail