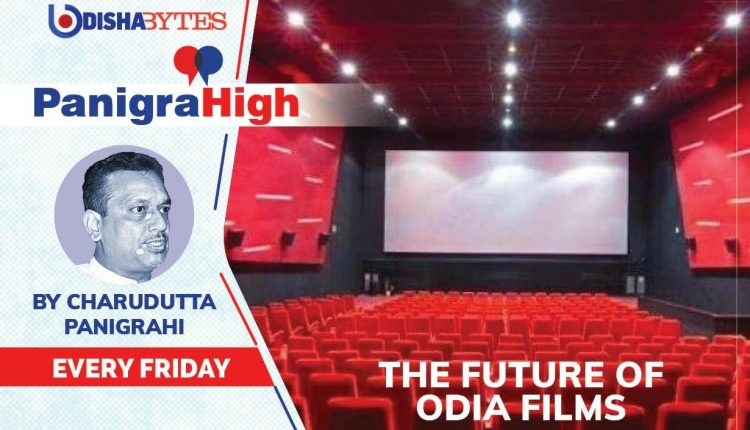 Odia films have a bright future because it can only rise after touching the nadir. That’s the silver lining for an industry which has for years not seen many original scripts.

Stories of yesteryears leaned a lot on Tollywood influences till they turned ‘South wood’ (Tollywood (Telugu), Kollywood (Tamil), Mollywood (Malayalam) and Sandalwood (Kannada). Storytelling gives tremendous opportunities to map our culture and mainstream. But how do we achieve it when our own norms are not mainstream in our society? How do we expect films to talk to us when our own conversations are almost muted? Where is the book reading happening? Where are we celebrating our stories or our writers?

In the last 30 years the same set of writers have more or less been getting the awards almost. Odia writing in a way has become lifeless. A few postings on social media which are outpourings rather than creations are not only shrinking the vastness of Odia thinking but is also making it trite and cornball. How do we feed stories to our cinema? Where is the stock? Films need smart stories or the ones which can be adapted to good commercial value. I advocate commercial films for Odisha to stabilise the industry.

First and foremost, the workers in the industry need to survive. There are well over 10,000 technicians, cine workers and allied professionals. If they won’t sustain then the industry will hire professionals from outside and Odisha will be reduced to be a location for shooting at cheap labour costs. This dangerous trend has started. Odisha-centric stories can create an Ollywood niche and help make money for the industry. Content can never be neglected. Whether it is OTT, TV or theatres, creative content can only keep the audience interested. Special effects, gimmicks, cameo roles of Bollywood stars are after all features to sell. But the main product must be of value.

Lipika Singh Darai, Abhishek Swain, Partha Sarathi Ray, Biswajit Paital, Biswanath Rath, Ashutosh Pattnaik, Atish Rout, Jitendriya Pradhan, Amartya Bhattacharyya and Debamitra Biswal are some of the bright young film talents who are raring to go. There are many more who are below the radar – from Sambalpur, Koraput, Sundargarh, Baripada. I have worked with Livingstone Tikari from Rayagada. He has done commendable work, making films on mobile phones and ingenious low-cost settings. His modest background has not killed his dreams. But he needs support to make a career out of films. The list of young sparks is long.

We can think of start-ups and hackathons but why don’t we organise literature competitions – online or offline? What is our contribution to literature in Odisha? From where will films get stories from? There are 35 universities in Odisha, more than 120 Rotary Clubs, thousands of civil society community organisations, prominent libraries in each district, youth clubs in each village but we hardly have platforms to bring in the youth and discuss literature, even informally, in a khatti environment. Everyone is knowledgeable and quite updated these days, thanks to the social media. But the young writers have to mostly come to Bhubaneswar to a café to discuss music or literature. Only in rarefied atmospheres. Literary events organised in Bhubaneswar (all of them are organised in Bhubaneswar, even the ones named after other districts) are meant only for a handful of “sponsors, repeat names on the guest list and repeat names on the felicitation lists”.

Cuttack has lost its place as the culture hub. They look like moribund events to propitiate a few for ulterior favours. In all this literature is the victim. Can’t the TV channels spend less and create more branding for themselves by going to tier II towns and organise youth literary events? It will help them scout affordable talents for their soap operas and programmes also. Their business development exercises can also help Odia literature and Odia films in turn.

The growth of the economy should typically foster broad-based appreciation of and indulgence in art. But in Odisha, since the boom in extraction industry, the quality of films has not shown any improvement in content. A direct correlation need not be established. But the availability of funds should have encouraged more VCs or corporate funding for films. Film houses or projects are still struggling for a good and ‘independent’ budget. Globally there is rapidly growing interest in the potential of the cultural and creative industries to steer sustainable development and thereby create inclusive job/entrepreneurial opportunities. So much so that UNESCO has come up with guidelines to measure and compile statistics about the economic contribution of the cultural industries. When it comes to UNESCO, we only remember our historic preservation of monuments. What about the people who create magic on celluloid, of value for times to come? The outputs have high symbolic value. They talk about US, here and now.

Let OFDC (Odisha Film Development Corporation) set up a funding panel, which will recommend funding of say 20 films every year. The corporation, since its birth in 1976, and by the end of 2020, has provided Rs 4.86 crore term loan to 45 producers. In 2019-20 it has given loan to one producer/film. By 2018-19, 102 producers have received Rs 1.63 crore from OFDC towards soft-cum-bridge loan. This loan is meant to help the producers complete the films on the floor. In the same period subsidy of about Rs 4.68 crore has been given to 318 producers to help production of films. This scale of support to an industry, which started in 1936 and is still surviving and is beleaguered, smacks of sheer apathy. Am I such a philistine? Give it industry status, not with a glossy policy document, but by providing financial incentives.

The youth of Odisha and diaspora are exposed today to low grade film content, music and entertainment which are blatantly salacious and misogynistic. But ‘original’ Odia film screenplay need not also mean abject rural poverty, thatched houses, youth migrating to city for jobs, people dressed in rags, perennially wailing mothers and uncommonly coy daughters and slapstick ‘apology’ in the name of comedy. Life has changed unbelievably in Odisha. Our social life has changed dramatically. I had spoken to youths across districts, and I could get their honest feedback. They find Odia films, the old ones, archaic and out of context. “They are only good for retro-celebrations and webinar expert discussions” is what they say. Generation gaps are well understood. The films of today though mostly crass remakes are gasping to be desperately contemporary in technique, gimmicks, and casting. Otherwise, the industry will be locked down. The current crop of film producers and the artistes have shouldered the responsibility and have kept the industry alive. We should be obliged to them. We have been saved from chronic nostalgia amidst slothful inaction. Entertainment, if not timely and up to date will face painful demise. In the absence of Odia stories, the films are cut and paste of three four regional and Bollywood blockbusters. But these films also have a fan following because they entertain people. They are there when and where it matters.

But I don’t buy the alibi that the quality of films is inescapably a victim of the audience choice. In Odisha, films are supply driven and rarely demand driven. Ollywood has the influence to change audience preferences. The alibi is an escape route. At the same time, quality films should not thrive only on government patronage, should not be intolerably arty and award hungry and should not be limited in and confined to hackneyed Odia stereotypes. These stereotypes are passe. You and I do not talk or behave the way it is shown in movies now. Our women do not dress up in their daily lives like the way they shock in soap operas. Balaji-style operas need not be copied in Odia. Create our distinct style. That demands originality which will come from the youngsters who do their  researched well, experienced in different lifestyles, are well travelled, love Odisha and are ready to push Odia culture spring out of the clutches of the hubris. Provide seed funds to the creative energies and watch how they take Odia creative economy and culture-esteem to unparalleled heights. Believe in them now when regional movies (OTT included) are the future of silver screen federalism.