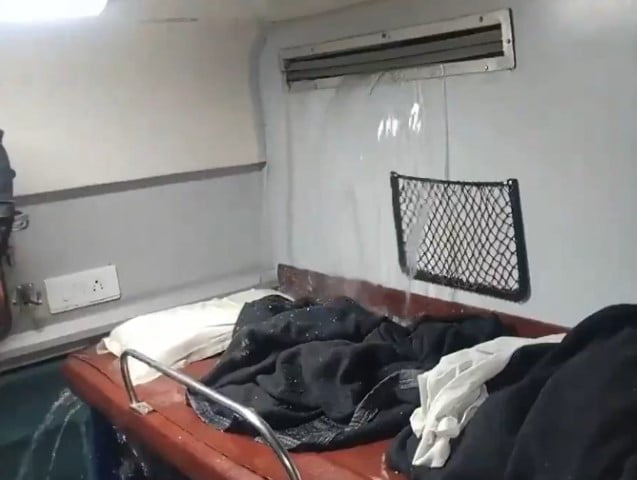 Bengaluru: Rail travel can be quite unsettling at times despite improved amenities, especially if the staff fail to remain committed to their jobs.

Passengers travelling on Sanghamitra Express found this out the hard way on June 29 on a journey from Patna to Bengaluru.

The moment when the bogey in which the passengers were travelling got inundated with water gushing through the AC vent onto the berths, was captured by a traveller and shared on his Twitter account. The video has gone viral.

Someone suggested it was bathroom water overflowing because of a broken pipe.

The TTE also appeared to be in an intimidating mood, threatening the staff with dire consequences.

Though the DRM Bengaluru said that the complaint has been attended to by the duty staff,  what cannot be overlooked is the utter neglect towards maintenance and complete disregard for passenger comfort.

The latest incident comes despite claims of improved services and passenger convenience by the railways. That the incident happened in a first class AC coach has further irritated followers on social media, who have retweeted the video again and again. It turns out, an elderly couple in the coach had to bear the brunt of the ordeal. The berths allocated to them was the worst hit

In a late evening statement, the Railway Board forwarded a statement from the CPRO of South Western Railway, blaming the entire incident to incessant rainfall. There was heavy rainfall and wind when the train was passing through the Nagpur section. This lead to accumulation of leaves on drains, “resulting in the ingress of water through the AC duct”. The passenger area was immediately cleaned, it said.