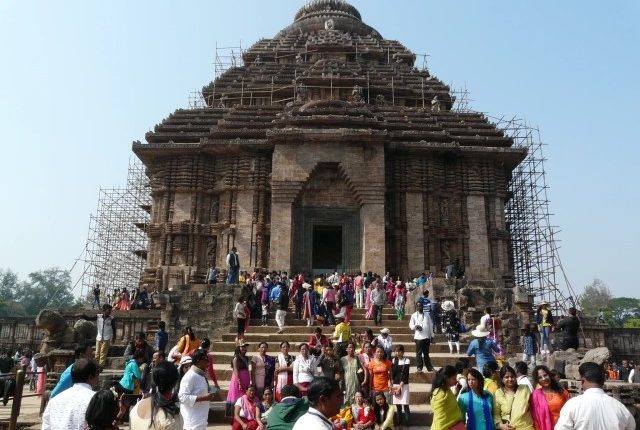 Puri: Thousands of devotees thronged Chandrabhaga beach near Sun Temple, Konark in Odisha’s Puri district to perform puja to Sun on the occasion of Samba Dasami on Sunday.

The devotees, mostly women, gathered at Chandrabhaga early in the morning and took holy dip in the sea on the auspicious day. Then they performed puja to Sun God and offered prasad.

The rituals continued till noon. The local administration had made adequate security arrangements at Konark as tourists, visitors and picnickers also organised feast in the casuarina forest along the beach to celebrate New Year.

Samba Dasami is also celebrated in the households with religious fervour in Odisha. Normally married women prepare different types of ‘pitha’ (traditional cakes), special ‘khichdi’ and Ghadghadia Tarkari (a kind of curry) on the day. The cooked items along with fruits and other sweets are offered to Sun Gud during puja and later, served the family members.

One of important festivals in the state, Samba Dashami is celebrated on the 10th day of Shukla Paksha (bright fortnight) of Pausa month in the Odia calendar. The day is dedicated to the worship of Sun God who is believed to have the power to heal diseases. The women worship Sun God to keep their children free from the diseases.

The day also holds religious significance. It is related to Samba, the son of Krishna. Once, Samba, who was very notorious, teased Sage Narada for his looks. Narada complained about it to Krishna. Out of anger, Lord Krishna cursed Samba to suffer from leprosy. As the curse cannot be revoked, Krishna advised Samba to pray to Sun God to cure him.

After 12 years of severe penance at Chandrabhaga, the Sun God was pleased. Then Samba took bath in the holy water of the river and got cured from the disease on Samba Dashami.