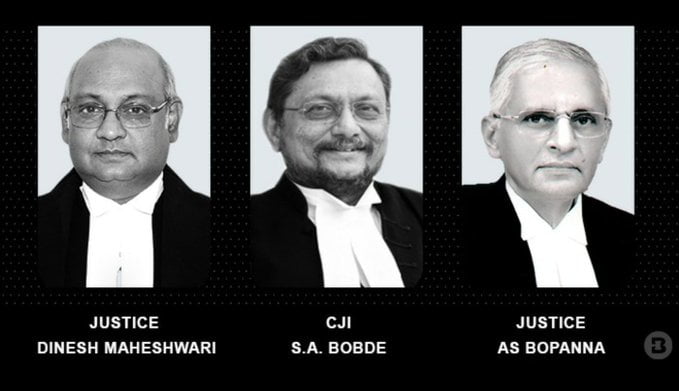 New Delhi: A three-judge bench of Supreme Court comprising Chief Justice SA Bobde Justice Dinesh Maheshwari and Justice AS Bopanna will be hearing the review petitions on Rath Yatra at 2.30 pm on Monday.

It is the same bench, which had passed the June 18 order staying Rath Yatra.

The CJI will conduct hearing from Nagpur through video conferencing, sources said.

Earlier in the day, the Odisha government had told the Supreme Court that it will endeavour to make necessary arrangements if Rath Yatra is confined to Puri alone in a limited way without public attendance as proposed by Gajapati Maharaj Dibyasingha Deb.

The Centre also mentioned Rath Yatra issue before a bench headed by Justice Arun Mishra and said that it can be held without the participation of the general public.

Solicitor-General Tushar Mehta told the SC that rituals, which have been going on for centuries, should not be disrupted. He suggested live telecast of the entire Rath Yatra from Puri. “If Lord Jagannath will not come out tomorrow, he cannot come out for 12 years as per traditions. While maintaining precautions to ensure that pandemic is not spread, the Odisha government can impose a curfew for a day and conduct Rath Yatra on June 23,” he said.

Following which, the apex court said that it will hear the issue after 30 minutes.

Justice Mishra then informed the counsel that CJI has decided to hear the matter by constituting a three-judge bench headed by CJI. “You make your prayers for modification of June 18 order (stalling Rath Yatra) before CJI bench,” he said.