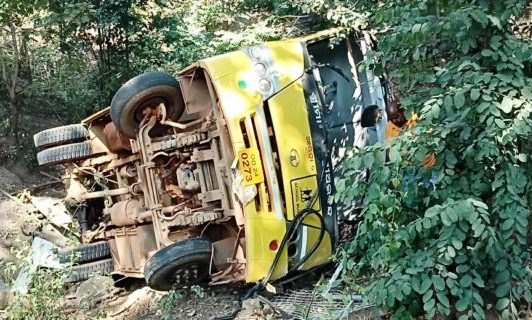 Nabarangpur: Three teachers were killed and 20 others sustained injuries when a school bus skidded off and fell into a gorge on Jharigaon-Chandahandi Ghat Road in Nabarangpur district on Sunday.

The deceased have been identified as Lalit Mohan Patnaik, a retired teacher, and Niranjan Nayak and Rina Nayak, both teachers of Sri Aurobindo Integral Education Centre.

The bus carrying teachers and students from Raighar, Nabarangpur, Umerkote and Jharigaon was on its way to Chandahandi when the mishap took place.

School superintendent Subhakanta Mishra, who also sustained minor injuries, said, “We were en route Chandahandi to attend a seminar in Aurobindo School when the driver lost control over the bus near the Ghati while negotiating a motorcycle coming from the opposite direction.”

While three persons died on the spot, the injured were rushed to Jharigaon CHC.

On being informed, Jharigaon fire brigade officials reached the spot and recovered the bodies.