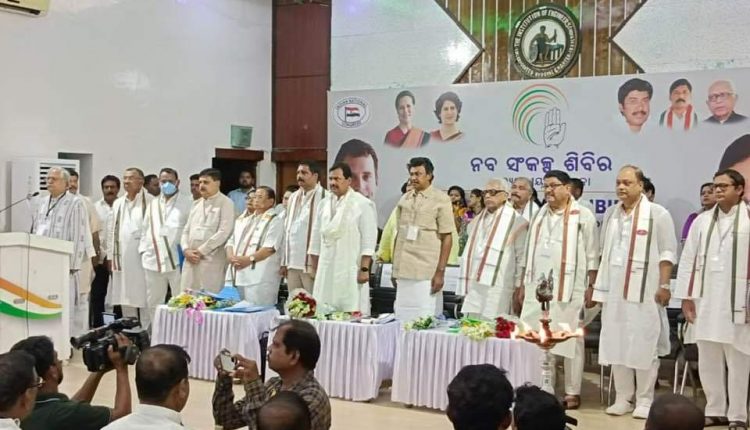 Bhubaneswar: While Congress is on a ‘Bharat Jodo’ campaign, the absence of three legislators in the two-day ‘Nava Sankalp Shivir’, being organised by the Odisha unit under the leadership of its new president Sarat Pattnayak to strengthen the party ahead of 2024 elections, has sparked speculation of fresh discontent.

Barabati-Cuttack MLA Mohammed Moquim, reportedly an aspirant for the post, was conspicuous by his absence. He excused himself over some prior commitment in Cuttack, sources said.

Similarly, Tara Prasad Bahinitipati,  who had been pushing for an MLA to head the OPCC, could not make it to the Shivir as he was not keeping well. However, his wife Minakshi, who is Koraput district Congress president, attended the camp that decided to launch padayatra in all the 30 districts of the state from August 9 to re-establish the party’s connect with the people.

Speaking to the media, the Jeypore MLA said that he had fallen ill after campaigning for the Brajarajnagar bypoll in the scorching heat. “I developed gastric tendencies which again led to chest pain. Doctors advised complete rest. That’s why I had to skip the camp,” he said.

Congress MLA from Angul Ramesh Jena, who is away in Leh & Ladakh, was also absent.

At the Shivir, Pattanayak called upon partymen not to lose confidence because of the party’s reduced strength in the assembly. He had a word of caution for those indulging in factionalism and warned leaders to refrain from whisper campaigns. “I do not have any discrimination about the leaders and workers. Everybody is free to approach me with whatever suggestions and plans to strengthen the party,” he said.

What Is Sologamy To Be Observed By Gujarat Woman On June 11?