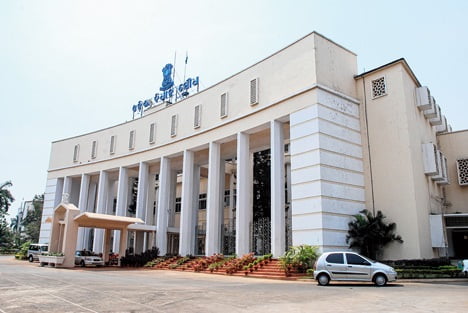 Bhubaneswar: Ahead of the winter session of Odisha Assembly, Odisha Director General of Police (DGP) Sunil Bansal on Wednesday reviewed the security arrangements.

“A 34-platoon police force will be deployed under a three-tier security arrangement, which will be supervised by around 80 officers,” the DGP said.

Uniformed police personnel will be deployed at the inner cordon of the assembly while some will look after the security arrangements at the entrance gates.

Keeping in view the protest rallies, tight security arrangements have also been made in the vicinity and the Mahatma Gandhi Marg. Five Additional DCPs, 11 ACPs, 13 IICs, and 62 ASIs have been engaged in the security setup.

Five Controls rooms have been set up to keep a vigil on the movement of the crowd. Intelligence Department sleuths, striking force, quick response teams, Special technical teams, armed police personnel, and rooftop security, have also been deployed.

Besides, special units of the police force with expertise in anti-terrorist operations have been kept ready. They can be pressed into service whenever required.

Meanwhile, government chief whip Prashant Muduli informed that a Biju Janata Dal (BJD) Legislature Party meeting will be held at 10.30 am on Thursday ahead of the commencement of the winter session on Thursday. “We are not aware of the issues which the opposition parties may raise. But, we are always ready for smooth conduct of the House proceedings,” he said.

It is pertinent to mention here that the 11th session of the 16th Odisha Legislative Assembly will commence at 11 am on November 24 and continue till December 31. There will be 33 working days and five no-meeting days during this session of the assembly.

‘Today He Tried To Kill Me Cut Me In Pieces And Throw Me Away’: Shraddha’s Complaint Letter Of 2020 Against Aaftab