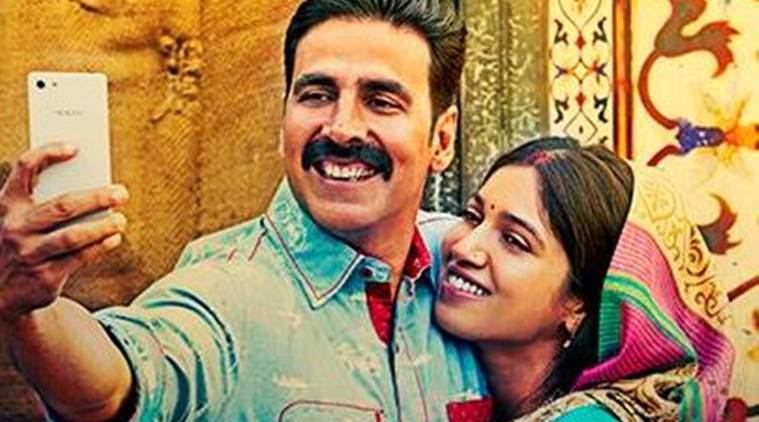 Twenty-one days at the theatres and still going strong!!! And no, it is not yet another run-of-the-mill story of woman empowerment. A film with an unusual approach with an even-more unusual title (that had the danger of not luring people), a not-so-glamorous actress Bhumi, with a suddenly-aged Akshay along with a subject that people shirk from discussing! But guess what – it worked! In its fourteen days of release, it had grossed ₹198.44 crore worldwide!
Whether it is Priyanka Bharti from Uttar Pradesh or Anita Narre from Madhya Pradesh who could have inspired the movie ‘Toilet’, credit goes to Jaya (Bhumi Pednekar) for portraying their story so convincingly, the unflinching husband Keshav (Akshay Kumar) for sticking around the need of his wife and of course director Shree Narayan Singh for dealing so deftly such an important issue that has been plaguing Indian society since time immemorial. Maybe the word ‘immemorial’ is slightly exaggerated, because if we track Indian history, the Indus valley civilisation had the world’s earliest version of flush toilets within the confines of houses. So, one wonders when did the problem start in the Indian society? But no, the movie ‘Toilet’ does not give you the answer to this question. But doesn’t matter, because it addresses many others!
Apart from the pressing need of a toilet for the newly-wed wife of Keshav, what makes the theme interesting are the ways in which Jaya is supported and helped by Keshav till the problem is solved. Under some different pretext, Jaya is taken to an acquaintance’s house whose house has a toilet inside the premises. Keshav escorts her to the fields for open defecation, on an occasion or two, early in the morning. However, this I feel, weakens the storyline a bit, since Jaya apes the very women she despises, indulging in the same ‘shameful’ act. But desperation takes over her, and we have to close our eyes when it is as urgent as ‘nature’s call’! When all of these desperate acts cannot be repeated every day, Keshav takes the pain of taking Jaya to the railway station every morning for her to use the train toilet. This works for both Keshav and Jaya, till the point Jaya gets trapped in the train toilet due to a vendor’s goods being stuck on the door externally. This might be seen as the Climatic point in the story. The stuck door echoes the mind of Jaya that feels totally fed up in her situation- always having to depend on her husband for a trivial thing as relieving herself daily! She decides to take the opportunity to flee to her parents’ place that has a toilet.
What gets slightly unconvincing is that Jaya fails to recognise the unwavering love of her husband Keshav in a village where no man supports his wife, in terms of the need for a private toilet in the confines of her house. However, that is how the story had to move on, I think! Keshav leaves no stone unturned. He finally builds a toilet in the premises of their house, despite serious threats from his superstitious father. And mind you, he was not mildly orthodox- a father who could not accept a daughter-in-law if she did not have five fingers because it would bring bad luck. The father breaks the toilet, and his son’s heart, because Keshav feels he might lose his wife forever. Sudhir Pandey as Pandit Vimalnath Sharma is the perfect strict, daunting and rigid father, who starves himself when Keshav forcibly starts building a toilet inside their home.
The cathartic moment in the story comes when Keshav’s grandmother sprains her leg in the dead of the night, and is unable to walk up to the village field for relieving herself. She uses the broken toilet, and Keshav’s father has a change of heart- finally, the anagnorisis! And from here on, one expects everything to fall in place. But no, the case goes to the court because of the divorce filed by Jaya. Things get resolved only when the judge gets an official notice from the office of the Chief minister that construction of toilets will start from the very next day.
Modi’s ‘Swachh Bharat Abhiyaan’ could not have reached the masses in a more interesting, acceptable and reasonable form! No one can ignore the humour contributed by Naru (Divyendu Sharma) in a film with a serious subject. Songs were well adapted to the theme and on a lighter note, the word ‘pyar’ in the song ‘Dar mat pagli pyar ho jayega’ could well have been substituted by ‘toilet’ to make it more meaningful! Though some people feel the movie could have been named otherwise, it could be the unique selling point because it is not every day that we visit a ‘toilet’ outside our homes!