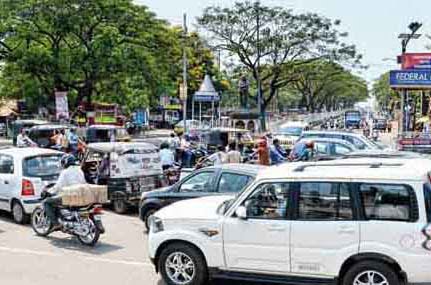 Bhubaneswar: Even as Chief Minister Naveen Patnaik was accorded a rousing welcome on his arrival in Bhubaneswar after returning from New Delhi with Capital Foundation Lifetime Achievement Award, people had a gruelling time due to traffic congestion.

Thousands of BJD workers and supporters from different parts of Odisha landed in the capital city to express their support to the chief minister. As they moved across the city, taking out rallies and processions holding party flags and banners and raising slogans in praise of Naveen, main junctions witnessed traffic snarls for around an hour.

As hundreds of vehicles stopped moving at major squares like Vani Vihar, Acharya Vihar, Airport, Raj Mahal and Jaydev Vihar, the traffic control went into a tizzy. Since it was the working hours, the office-goers and students were mostly affected.

Though the Commissionerate Police had earlier made alternative arrangement and issued advisory for diversion of the vehicular traffic, things went out of control due to unexpected turnout of the crowd. Some schools also stopped plying their buses to carry students and requested the parents to make own arrangements to take their wards.

An ambulance carrying a patient to Capital Hospital also got stranded on the road for half an hour due to traffic congestion with the road blocked by vehicles bumper to bumper.

Expressing his frustration, an office-goer said most of the employees could not failed to reach his office on time due to traffic congestion. No alternative arrangement was made for movement of the vehicles, he added.

“I was going to drop my daughter at her school. Due to traffic jam, she was late for her classes,” said another man trapped in traffic.

Minor accidents and scuffles were also reported as everybody tried to get past the other in the congestion.

But the police claimed that they took all possible steps to prevent any difficulties to the people during the BJD function.  “We had made adequate arrangements to regulate traffic. We are trying our best to normalise the traffic flow,” a local TV channel quoted Thakur Prasad Patra, Traffic DCP Bhubaneswar as saying.

Kamala Pujari Made To Dance Inside ICU In Cuttack: Attendant Appears Before Sub-Collector