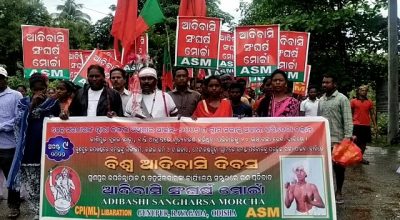 Rayagada: Hundreds of tribals including women on Tuesday took out a rally in Odisha’s Rayagada district, demanding World Tribal Day on August 9 to be declared as a national holiday.

The tribals under the aegis of the Adivasi Sangharsh Morcha (ASM) went around Gunupur town before staging a peaceful demonstration in front of the district sub-collector’s office. They also raised slogans in support of their demands.

The state secretary of the Morcha, Tripati Gamang handed over a memorandum containing their 16-point charter of demands, addressed to President Droupadi Murmu, to assistant collector Rajendra Choudhury. 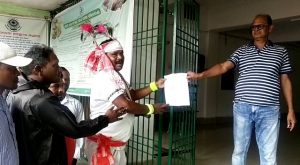 Gamang said though August has been announced as World Tribal Day, it is yet get any official recognition in the country. “We demand Tribal Say on August 9 to be declared as a national holiday,” he added.

Besides, the tribals demanded ‘patta’ (ownership) of forest land where they have been living for several generations and their right to forest produce. Their other demands included Rs 20 lakh compensation for each family of the tribals who have died due to Cholera in Kasipur block of Rayagada district.