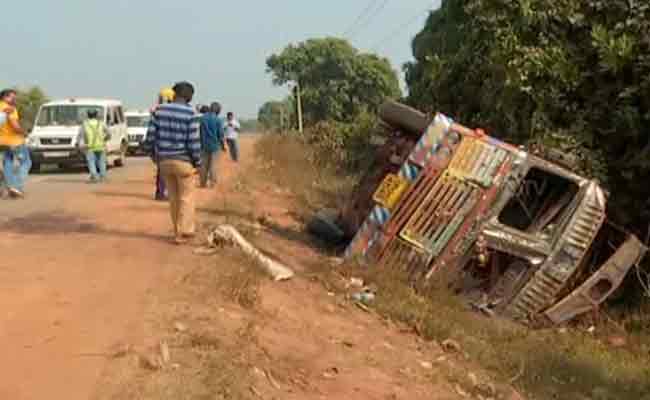 Berhampur: Even as efforts were on to evacuate the LPG from an overturned tanker on NH-16 near Tampara in Chhatrapur area of Ganjam district, there were two back-to-back road accidents at the same site on Wednesday.

According to reports, a team of five cops from Chhatrapur Police Station was on the way for rescue work after the LPG tanker overturned on the road early morning when the driver lost control of the vehicle due to poor visibility amid dense fog.

A cyclist suddenly came from the wrong side and as the driver of the police van tried to save him, he lost control of the vehicle which overturned.

All five policemen were seriously injured. Four of them were admitted to a government hospital in Chhatrapur, while the other one was shifted to MKCG Medical College and Hospital in Berhampur after his condition became critical.

Soon after that incident, a truck driver died on the spot after the vehicle fell on the side of the road at the same place.

According to reports, the truck driver, on seeing work going on near the LPG tanker, tried to keep the iron ore-laden truck to the side of the road when the rear tyre slipped and the vehicle overturned.

The body of the truck driver was taken for post-mortem.