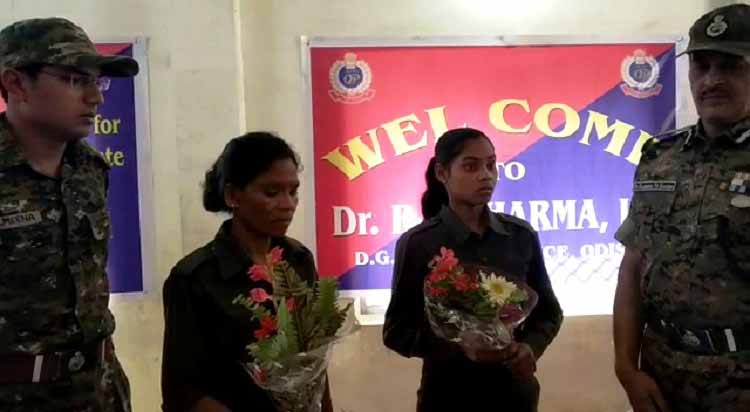 A member of the Gumma Area Committee, Sukanti was an active armed cadre of the outlawed CPI (Maoist) since 2003 and involved in 21 offences, including Gamphakonda blast, Sudhakonda blast, ransacking of Podia Outpost in Malkangiri district. She was carrying a cash reward of Rs 4 lakh on her head.

Sangita Khillo was also an armed cadre of Gumma Area committee and involved in six offences. She was carrying a cash reward of Rs 2 lakh on her head.

Talking to the media, the duo said the increased accessibility and development activities in the ”swabhiman area like the opening of the Gurupriya bridge made them realise the futility of the violent approach of the Maoists.

Speaking on the occasion, the DGP said that more and more Left-wing extremist (LWE) cadres are surrendering because of the sustained and coordinated activities of the security forces and the state government in combating the Maoists and bringing them to the mainstream.

“I personally appeal to the misguided youths of our society, who have joined as armed Maoist cadres to lay down their weapons and join the mainstream. I also congratulate the Malkangiri SP and his team for their sincere and sustained efforts in dealing with LWE problem on multiple fronts,” he added.