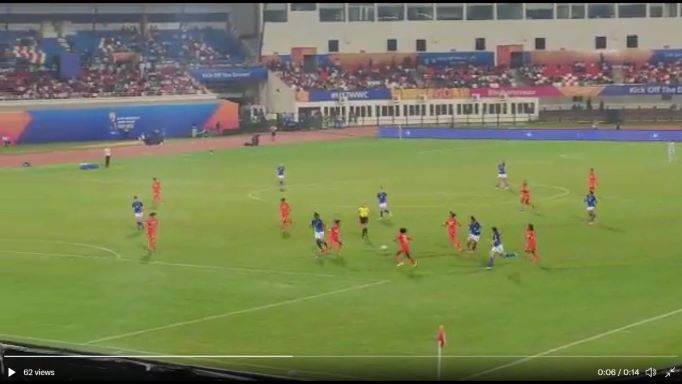 Bhubaneswar: India’s historic campaign in the Women’s U-17 World Cup ended with a 0-5 defeat at the hands of Brazil here on Monday night.

The home team was already out of contention for a knockout berth after having lost their first two matches. Playing for pride, the inexperienced girls were cheered on by an enthusiastic crowd at the Kalinga Stadium to make a match of it. But despite restricting the footballing powerhouse to 2 goals in the first half, Indians once again faded away as the match progressed.

Gabi Berchon gave Brazil the lead after 11 minutes. The Indians defended with all their might for the next half hour before Aline doubled Brazil’s advantage.

Aline got his second goal six minutes after half-time. Substitute Lara then scored a brace in the final four minutes of the game to end India’s misery.

India thus let in 16 goals in 3 games, without managing to score even once.

USA and Brazil advanced to the last-eight stage from Group A with 7 points each, while Cameroon (3) and India (0) finished third and fourth, respectively.

In the day’s first match at Kalinga Stadium, Nigerian gilrs beat Chile 2-1 to book a quarterfinal berth from Group B. Germany also advanced as group toppers.

Freshers’ Programme At SOA In Bhubaneswar: Students Told To Be Ready For 4th Industrial Revolution