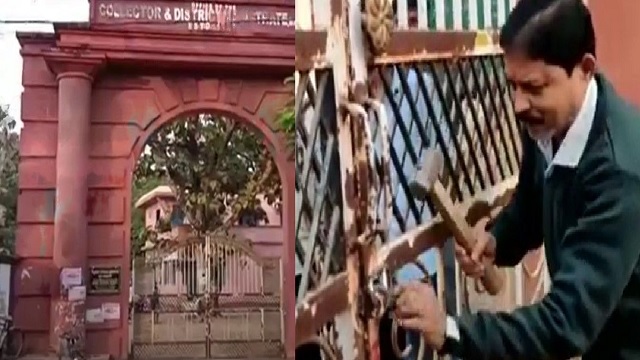 Balasore: In a bizarre incident, both gates of the Balasore district collectorate office were found locked twice on Saturday while the officials were in a meeting inside the building.

According to sources, the gate was found closed around 2 pm after Collector Dattatraya Bhausaheb Shinde left on a district visit. A clerk managed to break the lock.

The officials of different departments, who were inside the collectorate office, found both gates locked again around 3 pm after the meeting ended.

Advocate Manoj Kumar Nayak arrived at the spot and tried to break the locks with a hammer. Local alleged that an unidentified person came in a bicycle and fled the spot after locking both the gates.

Meanwhile, Sahadevkhunta Police has initiated a probe into the matter to ascertain the identity of the culprit.