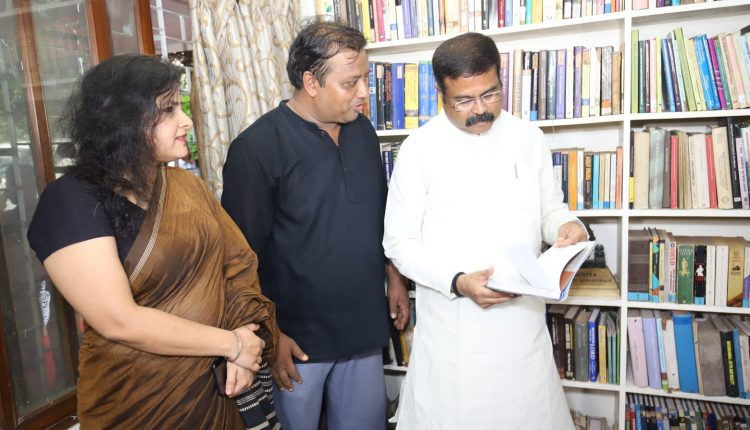 Bhubaneswar: Union Minister of Education and Skill Development and Entrepreneurship Dharmendra Pradhan on Friday inaugurated the LKM Centre and Library in Odisha capital and declared it open to the public.

The LKM Centre and Library has been set up by the LK Mahapatra Memorial Trust in memory of the eminent anthropologist Prof LK Mahapatra at his residence in Satyanagar.

Prof Mahapatra was one of India’s eminent anthropologists, who pioneered research on development anthropology and development induced displacement. He also established the discipline in Odisha and taught and headed the Department of Anthropology at Utkal University, which became the first Centre for Excellence in Anthropology in India. Prof Mahapatra subsequently became vice-chancellor at Utkal and Sambalpur universities and chairman of Nabakrushna Choudhury Centre for Development Studies.

Pradhan was a student of the last batch taught by Professor Mahapatra in Anthropology department of at Utkal University. Paying tributes to the vision and pioneering research done by Prof Mahapatra, the Minister said the multi-disciplinarity, started by him in Utkal University 40 years back, has been adopted in the new National Education Policy. He also talked about Prof Mahapatra’s pioneering research on South East Asia, which the Centre has decided to focus on.

The library houses the books and research papers of Prof Mahapatra along with his field notes that give an insight into the working of a master ethnographer. His personal library including classics of anthropology and social sciences from the 1950s, many of which are out of print, has also been opened in the facility. It has a good collection of writings on Tribal Studies, Development Anthropology and South-East Asia, particularly Indonesia.

The library has been supplemented with books on social sciences, particularly development economics, from Bakul Foundation, set up by Prof Mahapatra’s son Sujit on the same premises.